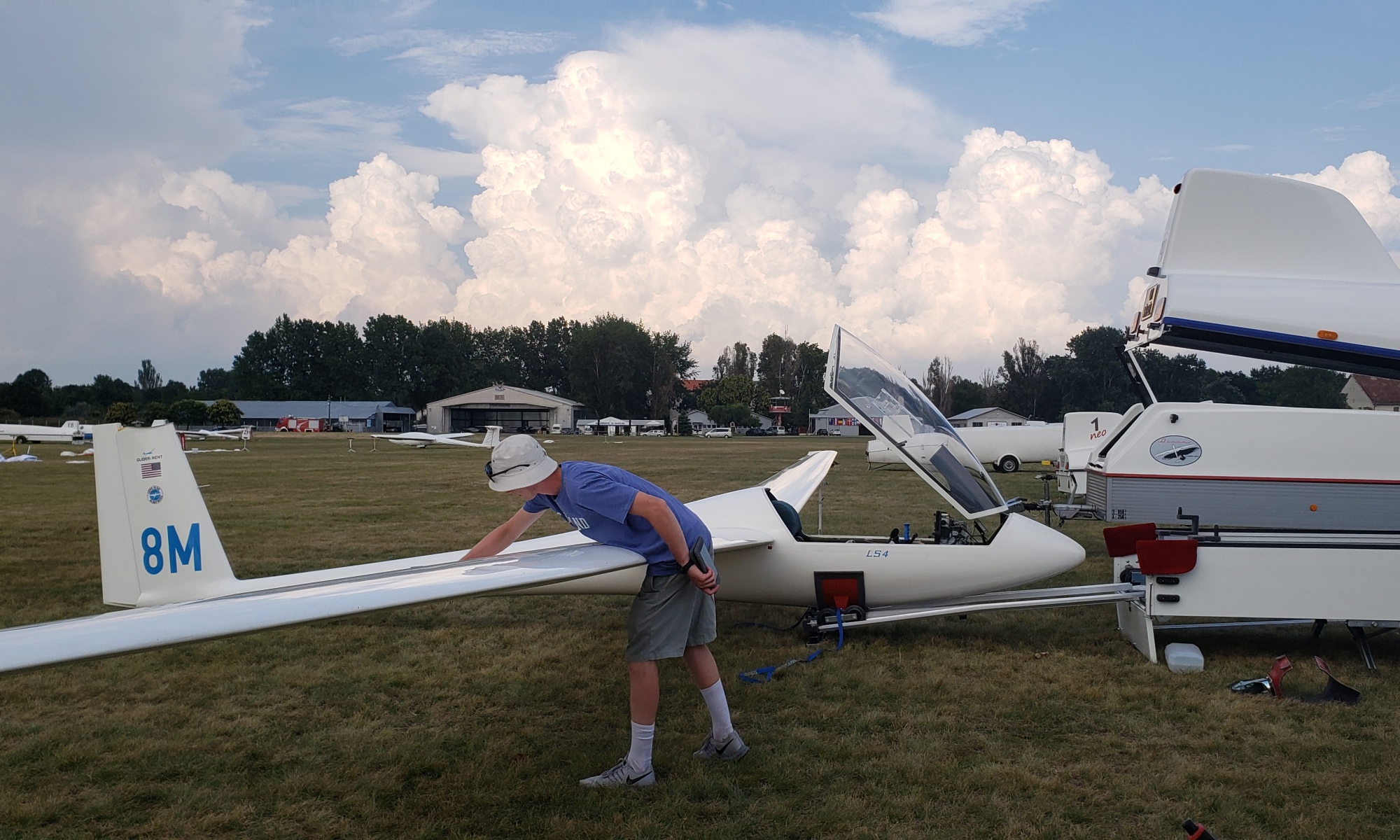 Apologies that I didn’t get the report out last night. It was a tough day for the US team and I was pretty beat from the flying. The Club team struggled around the course. Michael in Standard unfortunately landed out.

When we got back home, I was ready to check out and fall asleep. And good sleep is very important at a long contest! Most of the days I’ve been getting around 7-7.5 hours, not enough but I couldn’t do better. Today was a much better 9 hours!

Anyway, yesterday was a tricky day. The conditions were much less certain thanks to high cloud cover and vertical development. Bands of high cloud, rain, over-development, and under-development were all at play today. It looked like a day not to lose rather than a day to win.

The assigned area task (TAT for folks back home) took us to the north and then east across the Tisza River and then back west over the river once more and back home. Geography would pose a challenge to soaring as much as the weather. Gulp! Add to this a headwind on the west-bound leg and you get the full trifecta.

We worked our way to the start area and all got connected reasonably promptly. The gaggling was particularly impressive today. There were few thermals that were working in the start sector and the ones that were had everyone in them. The thermals were relatively narrow and the gaggles were getting so large that they were unable to stay in the lift anymore. It was a game of getting to the 1 knot thermal and stay in it long enough until 30 gliders join you and bolt to the next one with a couple gliders before the thermal gets eaten up alive by fiberglass. All of this at 3000ft AGL and in relatively hazy conditions. In the milky air it was hard to see much more than ten miles away.

As the start time passed, a couple early guys went out on course. High cloud cover was moving through and a band seemed nicely aligned with the course. Looking at the conditions, the possibility of several early markers and a good chance of the conditions cycling down soon, we bolted out of the start. In retrospect, we started too early. This was the first mistake.

The first leg worked out reasonably well for us. We found the up-cycle and drove pretty hard. As we approached the first sector it softened up a bit, but we were able to climb up without too much difficulty. Now the question was how to play the area; go deeper or turn? The glide computer optimization suggested to turn now. Looking ahead, there was a street well out in the distance. The cirrus band was moving in, starting to shadow the ground at the edge of the sector. This was a serious roll of the dice and we chose to pass. We figured that the conditions were starting to cycle down and the people behind us would be nipping the sector as it were. The street worked for the later starts. Mistake number two.

The lift on the other side of the river softened up quite a bit. Along the way we overran the sunny band as we entered the third sector. Mistake number three. This goes back to mistake number two; by not going deeper we turned too early for the cycle in the third cylinder. The folks who went deeper in the first sector were able to go considerably deeper in the second.

In the second sector, we kept getting lower and lower in shaded ground. We pulled the plug on that one and turned, struggling on the way out. Noah managed to stay connected and JP and I fell out of the band twice, down to 1000ft AGL or so. The third leg was a real slog. The conditions cycled down and we entered into survival mode. Ahead there was a storm brewing just upwind of the course line. There seemed a strong threat that the storm would shut down the run into the last sector and make it a distance day.

We plodded along into the headwind and over the wet ground. The nice looking clouds hardly generated much lift at all. Slowly but surely we made it across the river and into the gloomy sky on the other side. It was unpleasant being low under these wide cumulus clouds downwind of the storm. These are clouds that are working well at cloudbase, but you can’t count on them down low. Luckily there were a couple sunny patches ahead if they didn’t work.

At this point Noah had about 300 meters on JP and I. He managed to hook right on the line and JP and I got separated. JP hooked a 3 knotter behind me, but it was a bit too late for me to turn. JP followed Noah’s line, I went for a cloud in the sun at the inside edge of the sector.

Three knots on an upwind-low turn. This will have to do, even if I come in a minute or two under. There’s no where better for me to go upwind.

The climb petered out at 1200 meters, MC 2 for final glide. Looking downwind, there was a bit of street. Maybe I could bump up a bit?

As I left the clouds, I got into gentle sink under overcast. This is going to be an exciting glide.

I watched my glide wither away. 30 meters under for the finish. 50… 80! A little bit of good air, slowing down to minimum sink and milking the tailwind. The glide angle kept hovering between 0 and negative 50. There is one cloud ahead and it better freakin’ work.

A gaggle converged on this one thermal. Not much to climb in, but good air nonetheless. Up to MC 4 with 0 feet over for the finish cylinder. This is a bit healthier.

I shot off, “US Ground, 8M, is on final glide, probably looking at a direct landing!”

More sink approaching the steering turn. Dialing down to MC 3…

The angle to the airport looks good, but the air is not great. The ship is slowing and slowing. As I approached the finish, I am down to 100 km/h. I hit the finish 10 meters above the cylinder.

The air improved on the far side of the finish and I floated my way into a reasonable pattern. I was thrilled to be back on the ground, having survived this day.

Noah and JP did better on their glide, but we all struggled around the course. When we got back, hardly anyone had finished yet. It looked like we might have got around when a good bunch would land short. But the storm wasn’t as much of a factor and the herd managed to struggle around and make it back. Many got down to 1000ft as we were on final glide, under the overcast. They somehow managed to dig out and make it home.

The strategic errors did a number to our scores. We ended up in the bottom half of the scoresheet. However, we live to fight again. And today looks like a promising soaring day! We are ready to race!

Thanks to all our supporters back home that have given us the opportunity to represent the US at a world competition!