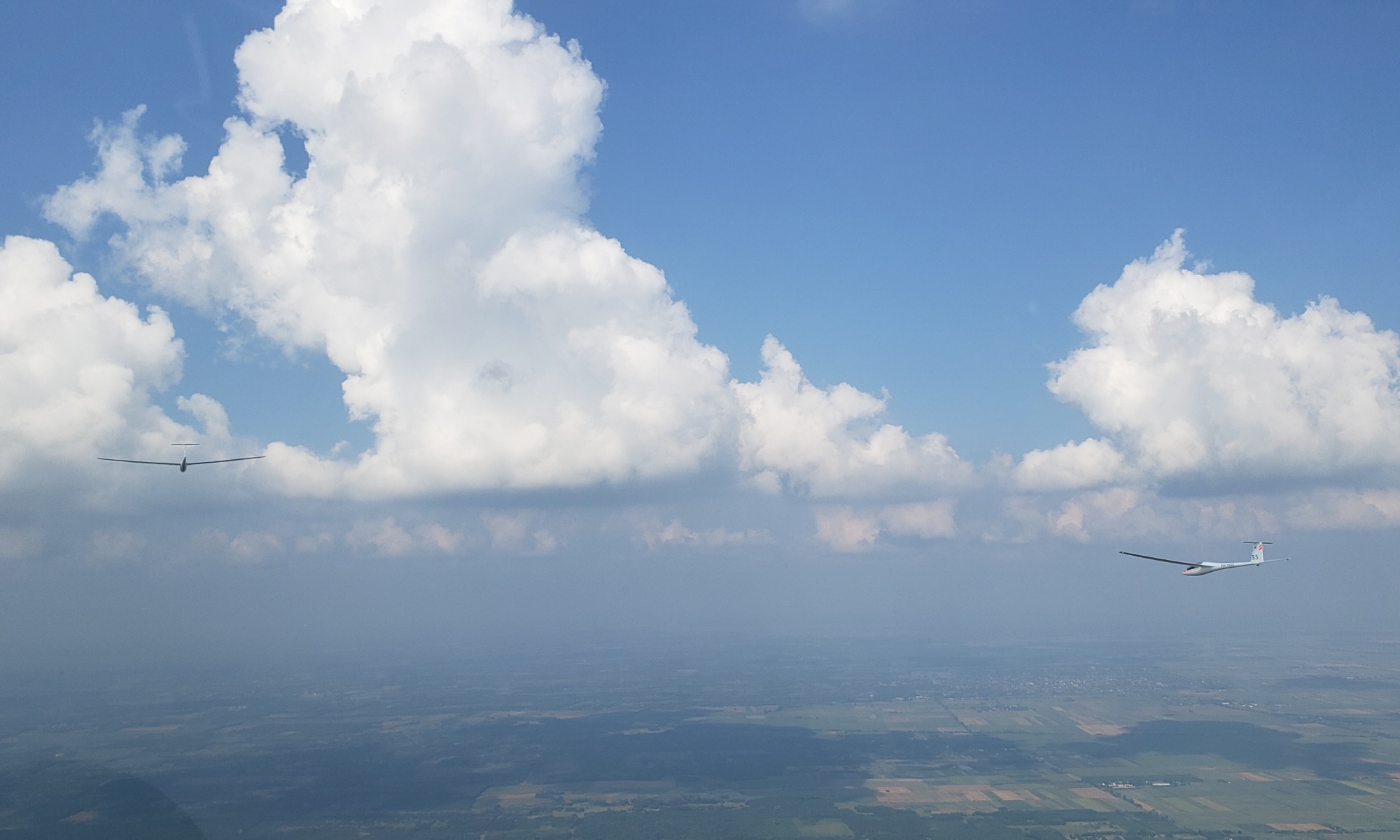 After much preparation and practice, we were raring to race! And today, the weather finally opened up. Everyone was really excited and the team had a great day.

Since there was rain the past several days, we were not expecting too much out of the weather. The meteorologist was pretty optimistic with the high temperatures and resulting cloudbase. We planned for it to be several notches weaker and lower, which is how it pretty much panned out.

I was the first one to launch off the grid and had no trouble staying up. The lift hardly went to 3000ft, but it was consistent and closely spaced. A gaggle quickly formed beneath me as we tiptoed our way to the start line to the north.

JP, Noah and I didn’t have much trouble getting connected today. We did a very good job staying together and flying efficiently. Once established in the start area, the big strategic question was when to start? On Assigned Tasks, this is hard to optimize and very easy to mess up. The first starters went about 25 minutes after the task opened, though the conditions hadn’t peaked yet. I figured 2pm was the optimal time today. As the time rolled through, the conditions started cycling down in the start and we lost our starting position. We ended up starting with the last solid group, at about 2:15pm. With the German and French teams, this was a good place to be and we drove hard out of the gate.

The first glide was in good air, but with dismal thermals. The group drove hard, passing everything up. We were happy to oblige, for a while at least. After several weak thermals, we decided to back off rather than go double or nothing and drive toward the dirt. It’s hard to win a contest on day one, but very easy to lose one.

As the group fizzled, we were now simply flying as a team of three. This worked out very well, we were all ON today. We especially kicked into gear on the second leg, catching up to the main gaggle and working our way through it. We never got much less than 700 meters and hardly above 1200 meters above the ground. Most of the thermals were in the 2-4 knot range, with one beautiful six knotter. During this whole time, it was a lot of work. I hardly had enough time to dive in my kit and dig out a granola bar or take a leak.

Approaching the third turnpoint, I fell behind a bit. I pedaled hard to catch up, but to no avail. After the turn, I was 500ft low on JP and Noah. We found a weak thermal, but I was too low to chase after them. Seeing the leading elements of the gaggle merging in with me, I cut them loose.

The gaggle did a good job, eventually coring a 4 knot thermal. This got me connected up high and I dove on ahead. Unfortunately, Noah and JP weren’t lucky in the air ahead and struggled around in 1-2 knot lift. This one strong thermal got me 200ft above, almost on final glide. The line was fizzling out, but it had good air. The last thermal got me to a MC 2 final glide, with a nice line to run and bump up. That worked out great; I went from a MC 2 glide to MC 5, 40 meters over! JP and Noah were close behind and we finished close together.

We flew very well today as a team. We managed to stay together very well and generally made good decisions. We started a little later than ideal, but it was reasonably justified given our situation at the start. Tactically, we were on the conservative side, trying to stay connected with the higher band. This was both to minimize risk and stay in the better lift; it seemed that above 800 meters the lift would often go from 1.5 knots to 2-4 knots. We did a good job staying with the group and avoiding taking much sporting risk. And in the end, we finished well in the top 1/3 of the scoresheet on a tricky day; we’re all happy with the result. It’s a consistency contest, not a sprint.

This is also a good opportunity to point out what team-flying is all about. Most people think it is about simply going faster and this is certainly a part of it. A team of two or three gliders that effectively communicates and flies together can go several percent faster than an individual could. This is because a team can work better energy lines and generally core thermals better. However, this is very hard to achieve consistently. Flying with other people usually requires small compromises in order to stay together. I liken it to canting wheels inward on a car. If you accept a little bit of loss, you stabilize the whole system and make it work consistently. This makes it hard to make the small gains stick all the time.

However, the stronger reason to fly as a team is that it greatly minimizes sporting risk. Flying in formation with two gliders side by side samples much more air than a single glider ever could. Your sampling goes from 15 meters and perhaps 10-15 meters that you can “feel” off the wings to 150 meters given a 100 yard spacing between the two ships. The odds of finding a thermal and centering it effectively is much much much greater.

As a result, a team is a very effective tool to avoid getting into that 15 minute hole, when you’re down to 1000ft, alone and looking at landing in a field. And if you’re lucky, to park in a one knot thermal while the gaggle motors above. Team flying keeps you out of trouble more so than it helps you go faster.

But there is a third reason to do it, which is that it is possible to make much better decisions over the long run. This is very hard to master and requires the personalities to work well together. The risk and reward stuff mentioned previously can work with a dictator and a wing-man. But we don’t fly that way; we fly collaboratively. Each pilot provides information and participates in the decision-making process. Each of us has his strong suits, weaknesses and biases. We know this and respect each other’s skill and ability. We also recognize our respect weaknesses and are willing to trust each other to override them. In short, when we fly together we are greater than the sum of our parts.

One example of this was when we were on the first leg and the lift got weak. I am often on the side of pushing the team harder forward. Given a sporting gamble, I am more willing to go double or nothing. The gain is little loss in efficiency if you do hook the next thermal. The risk is that you get low and stuck. But being a 1-26 pilot, I am used to this and it’s a game that I’m more often willing to play. Often it works, sometimes it doesn’t. But in any case, Noah and JP tend to act as a counterbalance to this. And when we were in a weak thermal, going down to less than one knot, I was quick to say “ready” and advise driving toward the next cloud low. Noah and JP advised patience and the bubble built to 2 knot and we got nicely established in the band.

Left to my own devices, I would have been digging in the weeds another 5 kilometers further ahead.

On the other hand, there are many cases that driving harder is the right way to go. And when picking up the pace is the right thing to do, I’m often the one who contributes more strongly to make that happen.

In the process, we all end up going faster.

Off to tomorrow, another good looking day!