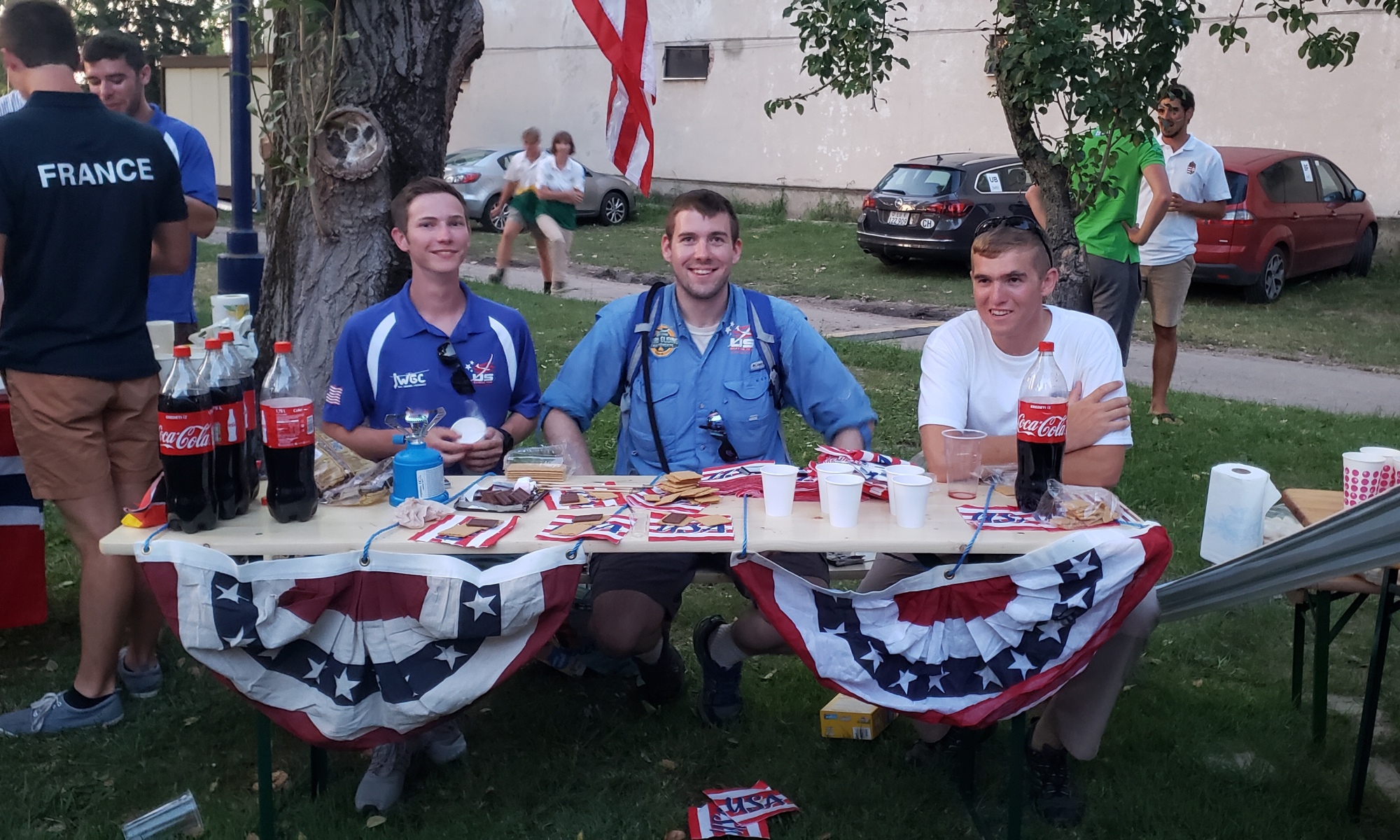 Having recovered from a difficult preceding day, we were really eager to race! The US team did well today, having made it around at a solid pace with some of the strongest teams at the competition. Today also featured international night and the US team was well represented with ‘Smores and Coca Cola. We had a great day!

The organizers tend to set shorter and more conservative tasks to try to get people home in time when there is an event in the evening. This usually does not work out well. The pilots simply play start gate roulette longer. In Lithuania, the gaggle refused to leave until 3pm on a 300km+ task and barely staggered home!

This time, the organizers really pulled the stops out. They launched us at 11:30am as further encouragement to get our butts on course. They had the Standard Class essentially fly the same task as Club Class, basically making the task an 80 glider drag race. In the end, they accomplished their goal; they cajoled the pilots out of the gate and almost everyone made it back on time for the party!

It was a slow starting day. The cloud bases refused to lift much above 1000 meters for well over an hour after we launched. The day was trailing the forecast (as usual it now seems) and everyone was milling around in the start area. The start opened and very few took the bait. Everyone was hoping for a switch to go off and the clouds to lift a lot, but they just barely inched upwards.

As we were touring the start area, we found the German and French teams. It was starting to get late and the British joined in. Good company! The group finally decided to go and we started a minute behind the Germans.

Life is good as a Club Class pilot when the Standard Class task heads in the same direction. They go out ahead, mark and center your next thermal. You pull in and core it on the first turn. You even see the outer radius of the whole thermal! This lets you out-climb them quite easily. Right as you reach their same altitude, they dive off and mark your next one. Rinse and repeat.

The Germans were milking the Standards dry and the rest of us were pedaling hard to keep up. We were driving at 160 km/h chasing 3-4 knot thermals!

This was pretty much the story for the entire day. The American and French teams were working very hard to get into a covering position on the German team and in a place where we could break if we had a good opportunity to do so. But they kept up a very solid pace and we were unable to build an energy advantage on them sufficient enough to make a break. So we stayed with them, driving at the speed of heat. All of us were flying with our hair on fire, trying not to fall off.

It was intriguing watching them fly. They fly in a loose formation, often times chasing the leader who was on the high side. They deviated *a lot*. It seemed excessive at times, but the good energy lines perhaps compensated for this. They flew very well as a group, that’s for sure.

On the second leg, Noah and I tried to make a break for it and almost made it stick. But the lift we found wasn’t so good and we were in danger of falling out of the band. The Germans hardly did any better and we rejoined their gaggle back on course pretty much at the same altitude.

JP stuck with them and did very well. He slowly picked his way up and got into a covering position. Noah and I never fully recovered; we were always chasing from below and never got into a position to reconcile this.

We were driving very, very hard. Falling off the back is a disaster, especially toward the end of the day. As Noah says, “You *got to* stay connected!”. The thermals started becoming more bubbly and we had to drive out low rather than stay in weak lift and watch the gaggle climb up and away. Noah was getting a bit tired and frazzled; I was the one keeping the pace today.

As we approached the third turn, we started getting dangerously low. We managed to hook a 3 knot climb as we rounded to the downwind side which considerably improved our situation. We were now 150-200 meters low on the Germans. JP was fully content to maintain his 50 meter advantage on the group at this point and cover them on home. No use in breaking away now.

I kicked into full gear now. Chocolate bar for some more glucose and water to wash it down. It’s the final leg and now’s the time to make the final mental sprint.

We slowly picked our way upwards. The Germans were getting tired and antsy approaching final glide. This is our opportunity; keep the pace up, don’t slacken off now.

The thermal weakens down to 1.5 knots.

I assure him, “There’s a better one out there!”

We roll in, several kilometers ahead of the Germans. JP has taken his energy advantage and pressed it for final glide. He’s ahead of all of us now.

Noah and I threw every bit of ourselves at making this thermal work to perfection. The Germans joined 100 meters above us. We roll out on final glide when we just had it; they stayed longer.

The glide was doing well for a while. Good energy along the way and we were slowly bumping up on the glide. At one point I was showing MC 5 for the finish. Then it started getting worse and worse. By the time we hit the steering turn, the Germans passed us once more and our glide was down to MC 1.

A cloud ahead after the turn. A good bump! Up to MC3 and we are floating home.

And we tied the Germans on the scoresheet!

JP finished well ahead of us, but he had a logger issue at the third turn. He missed the turn by 10 feet and had to eat a 50 point penalty. He was flying very well this day and we were bummed that this didn’t get represented in the scoresheet today.

In any case, our goal today was to work with a strong group. This worked out well today and we accomplished our objective.

Now that we were all back, we got to work setting up for International night! This event is a time honored tradition at World competitions. Each team brings its country’s food and drinks to share with all the other teams. They decorate their stands and everyone has a wonderful time. Each team usually brings their country’s best and strongest alcoholic drinks. The crews and team captains usually indulge quite a bit in this tradition as well. The US team did not; we take the flying seriously and none of the pilots and few of the crews had any booze for the night.

To represent US cuisine, we made Smores with Hershey chocolate, Graham crackers and marshmallows. The Germans lent us a camping stove which acted as the heat source. We had lots of folks come by and huddle over the little stove, melting their marshmallows to have their tasty Smore sandwich! Also, the Coke worked out well as we were the only team that did not serve alcoholic beverages. In turn, this gave many folks something to drink when they wanted a break from the alcohol, or for those who didn’t want to drink in the first place.

Our pilots and crews had a great time. We sampled food from all the different teams! The French had the most elegant and tastiest stuff. Their cheese was magnificent, along with their fish and liver pate. The Germans made Spätzle, basically Mac and Cheese but 100 times better. The Dutch had their really tasty waffles; the thin ones with the syrup inside. The Czechs had wonderful sausages. And the Aussies brought Vegemite! It was a real blast. The crews got to interact with lots of other teams and it was a wonderful evening that brought everyone together.

Today looks like another promising soaring day! Off to the races!

Thanks to all our supporters back home who have given us the opportunity to represent the US at a World competition!