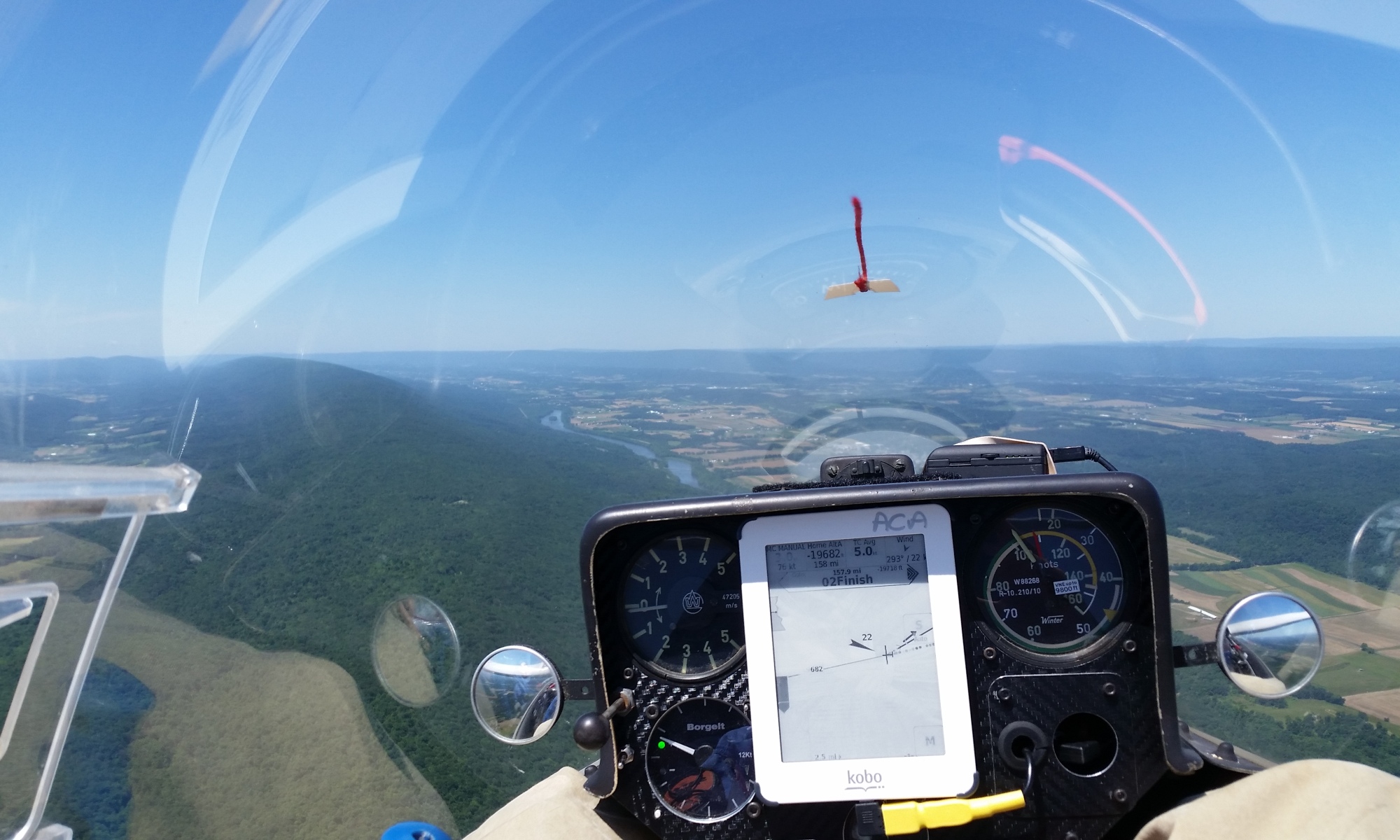 The LS3 was donated to the club by Steve Lenter. It was a wonderful ship, but it was in pretty rough shape. The wings and stabilizer were substantially crazed and there were areas where fiberglass was showing through. Since I was to fly this bird at the Club Class Nationals, I wanted to get it as race ready as possible. I quietly “prepared” the glider with several other confederates by filling the worst areas with bondo and then sanding the wing with 320 grit sandpaper. I figured that this quick fix would keep the surface sufficiently smooth for the duration of the competition. Ron Schwartz drove by and saw us working on the ship.

A week later, a riproaring ridge day tore through the Northeast. The competition day was canceled due to excessive wind. I took off on a spectacular ridge mission; a 12-hour flight from Wurtsboro NY to Wardensville WV, Lockhaven PA, and landed at Blairstown NJ. This was the longest soaring flight to date in an ACA club ship.

While I was airborne, Ron posted the following on the club chat group: “Daniel’s trying for a long O&R out of Wurtsboro in 44, ‘El Bondo’. ”

Ron had a heck of a sense of humor. The cat was out of the bag; I “ruined” the glider through my surreptitious work! There was all sorts of banter and agonizing, all with Ron quietly laughing that the ship was in the process of flying 1200km…

The day was a great ridge day, but the wind was howling. This was the second day of the Wurtsboro Club Class Nationals, but it was ultimately canceled due to safety concerns of launching the grid into the grizzly conditions. When I launched at 8am, it was still pretty reasonable. I found some weak wave-like conditions and started to work my way SW of Wurtsboro. The transition to the Blairstown ridge system is gnarly to say the least. The ridge is quite flat and in some places completely unlandable.

As I headed out, I linked up with Gregg Leslie and we were floating toward Port Jervis. He was a but lower than me, but at one point I saw him turn around. He noted that he thought I had enough to make it to High Point. I gingerly pressed on, but as I got closer, it did not look all that good. I was getting lower and lower and finally, I was down to 2400ft MSL with not quite enough to make High Point. I found some good fields to land in, but was not exactly excited at the prospect of landing out at 8:30am and in windy conditions to boot. I hit a thermal and started drifting over. Finally, when I had enough to make an honest dash for High Point, I went for it. However, just after that moment, I then hit a 2 knotter that gave me enough height to be reasonably comfortable. Phew!

Getting through High Point, Sunrise Mountain, and Culver Gap, I was plenty high and the ridge band was working well above the ridge. The worst of the transition was over. Finally beyond Millbrook, now it was time to get moving. The wind was ferocious, perhaps 20-25 knots at ridge top. I could not get the glider down on the trees… I was cruising along at 100 knots about 200 hundred feet above.

The run down to Hawk Mountain was uneventful and fast. After crossing Snyders, I waited for my street. It worked and I climbed up to about 3300ft without turning. I made a dash for Second Mountain and it looked like I had it made. Getting in closer and once I was committed, I hit strong sink. Looking through the gap and behind it, I saw I had the corner made and the fields for sure, but I was going to get around there low. I pushed the nose over and skirted around the corner going like a bat out of hell at 1300ft, a good third of the way below the ridge. With the wind blowing that hard, I quickly zoomed up to ridge top and headed along Second.

Getting beyond the Gold Mine, I hit the line and hooked a right. I floated up halfway into the transition to Sharp and then went for the jump. Again, atrocious sink and dumped the nose toward the ridge-line. I jumped over the ridge about 50ft above, going 80 knots.

I was not too pleased with these two jumps and they unnecessarily pushed up my heart-rate. Coming around the corner on Sharp, I said I am backing off for the rest of the day and next time I coming around several hundred feet higher for both of them. I was certain I had them made, but it was cutting it a bit too close.

Going along Sharp, I floated up the ridge without any problems. The jumps across to the Mahantango and Tuscarora were uneventful and high. Driving along the Tuscarora, I was going 110-120 knots in solid lift. At one point I hit an unbelievably hard bump. It just came out of thin air, like hitting a speed bump at 100 mph. I was so reclined in the glider that I did not hit the canopy, but I got flung against the straps and my sunglasses nearly flew off. Took about 10 seconds to get my bearings straight after that one.

(Most of the big hits are predictable and it is possible to slow down for them.)

Going across Dickeys Mountain and Sleepy Creek was easy. Now for the fun part, going to Great Northern Mountain.

Most of the time, we turn around at Shockey’s Knob at the end of Sleepy Creek Mountain. The wind tends to get weaker in this area, so going further SW is not a good idea. However, Great Northern Mountain is a spectacular ridge, quite high and majestic. Few have flown it as there are few places to land there, but when the day is working well, it is a really solid ridge.

I made the jump and flew all the way down to the “wall” at Wardensville. At that point, I climbed up and saw that the cloudbase was only about 4500ft. The thermals were quite poopy for the day. It was hazy and it didn’t seem like the thermals would get better for quite some time. At that point, I bagged the mission of heading down to the Massanutten and decided to get to the end of Great Northern, beyond the wall and turn.

Coming back up North, I ran the same line back up through Shade Mountain. Here I decided to go up to Lockhaven and get some OLC points. Going up there would embed a 800km triangle into the flight.

The jumps weren’t too bad. Getting across Seven Mountains was a bit exciting, but I weasled my way into a thermal and got high enough to make Nittany. At the Talladega transition, I thermalled up high enough to make Lockhaven and back to Nittany. I had enough flying that ridge. In the short section between Lockhaven and Jersey Shore, only about five miles, I fell off that ridge three times. Not again.

I got stuck for a while at the end of Nittany. Now I needed to climb up to make the downwind jump back to the Mahantango. The conditions were largely blue, with some clouds to the NE. I was hesitant to head to Williamsport knowing my history with that section of ridge, so I looked for a thermal on Nittany. After some digging and scratching, I finally climbed up to 6000ft and headed out.

Along the downwind run, I hit a whole lot of sink. I ended up going like 28-1 on the glide, with a 30 knot tailwind! I dug out over the extension of Jacks Mountain and that got me high enough to make it to the Mahantango and Bear Mountain. Home free!

During the flight, I entirely came to accept that it was unlikely I’d make it back to Wurtsboro. However, at this point it was about 5:15 or so and I reckoned I’d give it a go. Getting back to Blue Mountain, I put the pedal to the metal and tried to get up to Sunrise as quickly as I could. When I did, I couldn’t climb up higher than 3000ft and abandoned the effort. At that point, I decided to do another lap down to Hawk Mountain and in doing so get enough miles to possibly get a NY State Record.

I ended up landing at Blairstown at 8pm and Noah Reitter promptly retrieved me. It was a great day and a wonderful flight. Thanks a million Noah Reitter for retrieving me and Aero Club Albatross for providing the fantastic machine to do this flight.