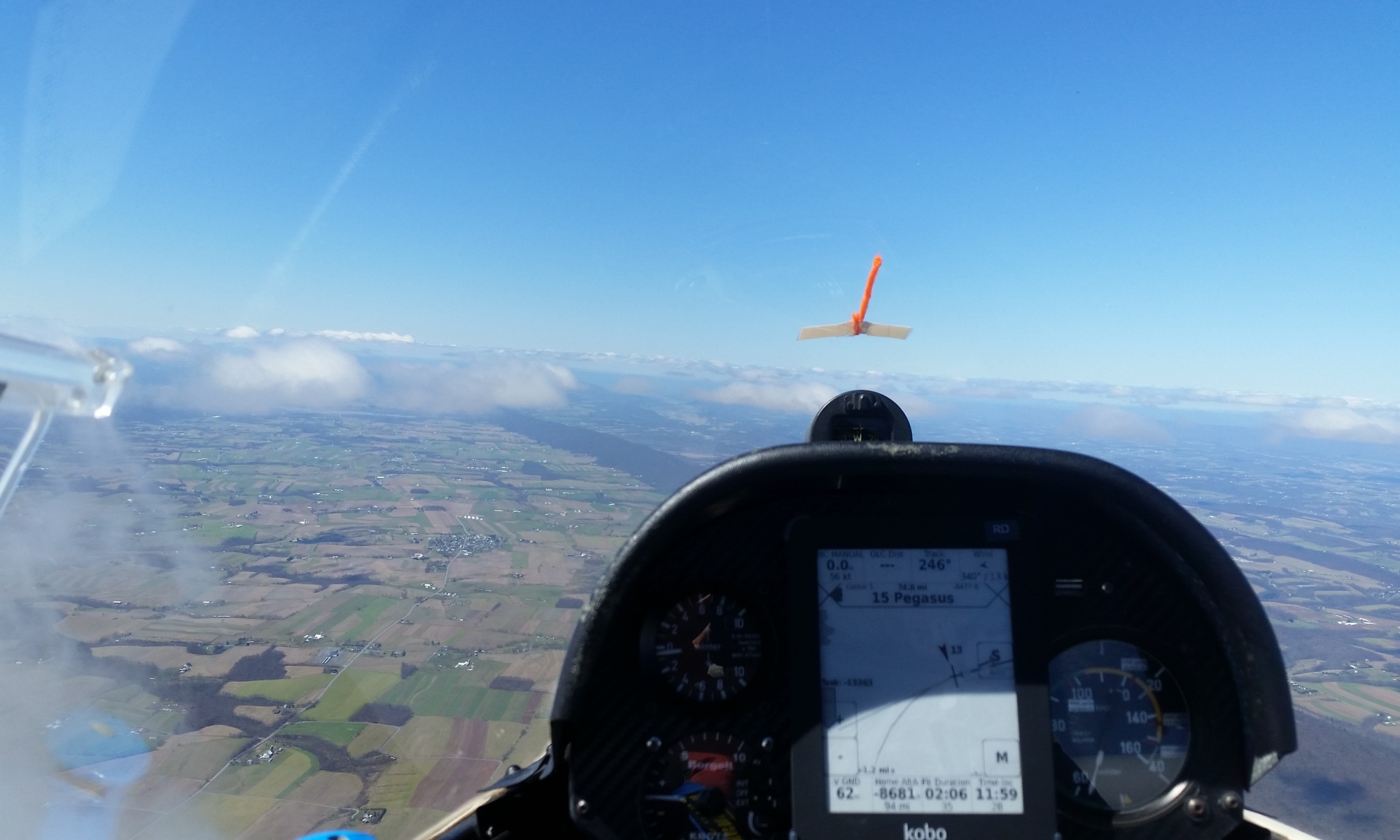 This was by far the most dynamic soaring day I had flown to date. After flying with Stan, I was in a wavy mindset, though I shot off on the ridge. Getting down to Hawk, I saw some rather wavy looking cumulus, though I failed to contact. Nonetheless, I got high enough to make the jump over to Sharp. This was already surprising to me. I expected that with such a strong inversion at 4000ft and with such wet ground, that the thermal activity would not develop until the latter half of the day. Already, we’re on a roll!

At this point, I transitioned into thermal flying, coasting along 2-3000ft along Sharp. I was sniffing for wave, figuring that with the sky as it was, a thermal would not be enough to make the jump to Bear. Near Tremont, I hit a very rotor-like thermal and climbed it up in the blue. Once I got to around 4500ft, I pushed forward and found 2-3 knot wave! It didn’t go all that high, though it was honest up through 5300ft. This was the first time I hit wave here and this is the beginning of the next really fascinating sequence of events.

I managed to stay above the clouds midway through Bear Mountain, though I found another nice rotor/wave cloud ahead. I connected with solid rotor and wave and was “thermalling” above the cloud. The winds aloft were so weak, about 12 knots that it just made sense to park at one spot like that. It was the darndest thing, seeing that there was more energy in the rotor/wave interface than in the thermals underneath.

I kept coasting along and again dropped out of the wave layer near the Susquehanna river. Now I was thinking it would be fun to make the run up to State College. The wind was not strong enough to make the ridges work here and I figured that the thermal activity was just starting to get good enough to let this happen. Unfortunately, this was not the case. I floundered in 1.5 knots until I started heading for the security of the Mahantango.

Now, I looked up and saw a bunch of small wave bars marching upwind. What if I could connect with the wave to get the altitude to make the subsequent upwind transitions? I started thermalling up, connected with rotor and then again into the wave. At 5700ft, I drove toward the next bar. Sure enough, I connect and climb up again. I was ecstatic; I figured out a way to make this upwind jump. The thermals were not good enough, but these little waves were going to let this happen.

I finally make it up to the extension of Jacks and now am looking for a climb to get over the next set of mountains. I scrounge around in weak lift and then felt every bone in my body pushing me to go to the next cloud. I look up and saw that the wave cloud was definitely there and I pushed 90 degrees off of course, 180 degrees from the direction I was going. It turned out this was a great decision because 90 seconds later, I hit 6 knot rotor and up I go to 5000ft!

This got me high enough to connect with a street and now I was home free up to Nittany. The day peaks at 2pm and the cloudbase goes up to 6000ft. Now I am pushing myself to shift gears and speed up. It was unusually difficult for me to do this after having struggled for so long.

Finally, I get to State College, take the picture and send it to Phil and start heading for home. My first reaction was that I turned too soon. I still had a little less than five hours of daylight. However, I pushed on and found that the decision was a good one. The day started to decay as quickly as it peaked and the clouds started to shrivel up. They were forming deep in the inversion layer, so I was now struggling to get up to 5000ft. I pretty much tiptoed the whole back, knowing that I couldn’t count on the ridge to save me.

Finally, once over Sharp, the wind starts to pick up again. The clouds are gone, but interestingly the day gets more unstable. By the time I get to Hawk, the air was simply wild. 5-7 knot thermals: Spring insanity! I drive along toward home, content with thermalling instead of using the ridge. I finally dip down on the ridge near the Ski Area, finding a strong band at 2200ft, coasting along at 90 knots. Coming around Wind Gap, it got quite weak for a while… I was just hanging in there at 1700ft until I got past Fitch’s Quarry. Coming around Water Gap, I drove along at 100 knots, though quickly regretted it. I hit some really strong gusts/rotor/thermal or what have you that just flung me around like a ragdoll near the upper reservoir. I dutifully slowed down, floated into Millbrook and called it a day two hours before sunset. I was too exhausted to do another lap.

This was by far the most dynamic day I had ever flown. I saw the air with all the influences of ridge, thermals and wave like never before. Using the wave as I did to get upwind was extremely fascinating as it was the only way to make that upwind jump at that time in the day. I don’t anticipate that this would be a consistent strategy, though it was so enjoyable to look at the sky and come up with a completely different way (for myself) to accomplish a soaring goal. This flight was definitely up in the most fun flights I had ever done.

Thanks a million Jimmy for towing us this morning and for Aero Club Albatross for letting me fly this extraordinary glider. The LS4 is just perfect for these conditions. When it comes time to float on home, it feels like a high performance Ka-6.