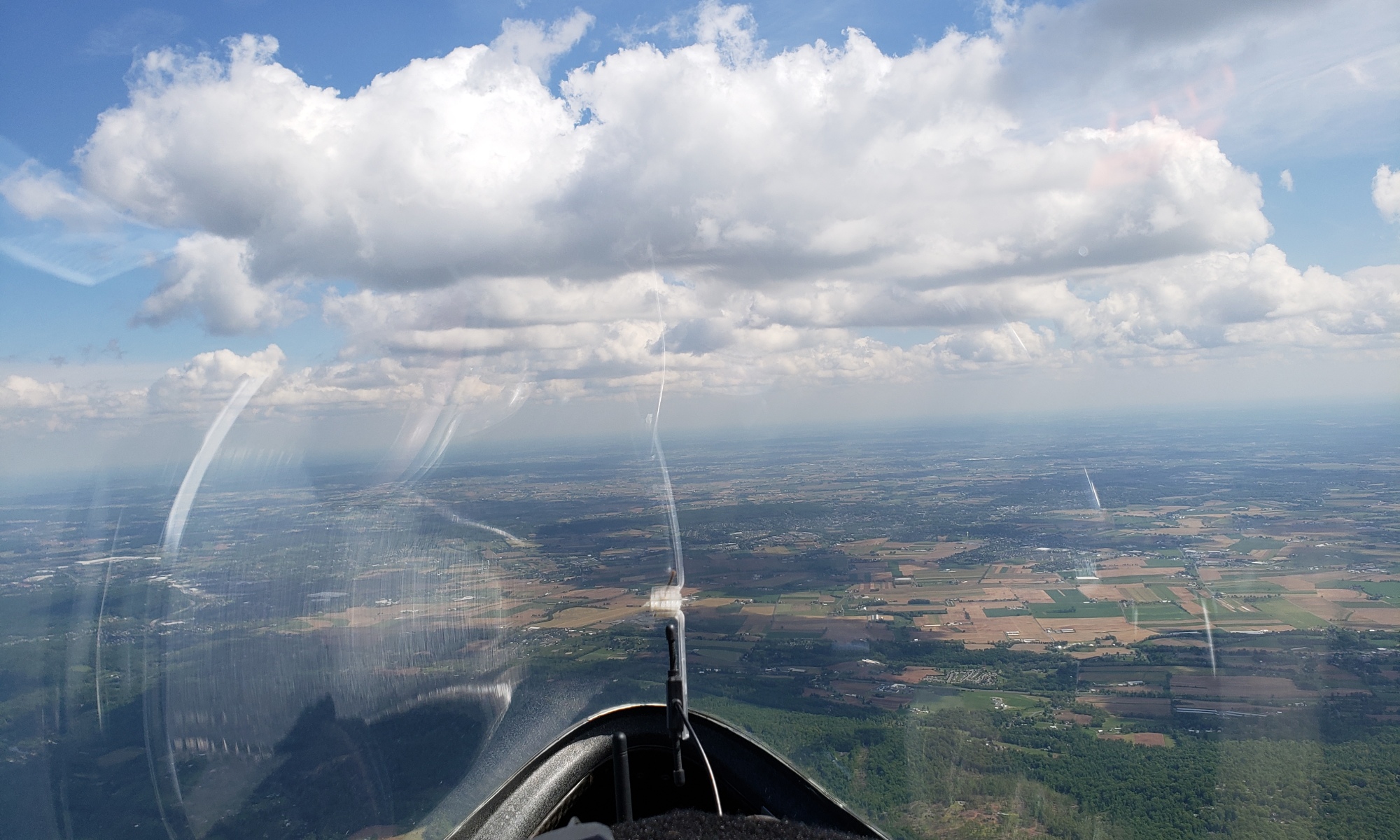 I don’t think a soaring forecast drove me as crazy as this one did. A backdoor cold front was to sweep through the area, but was incredibly finicky. Moisture in the ground, wind, cloudbase, and high cloud cover were all huge variables. I tracked the weather and changed the task with every model run. A little more wind, the ridge would work to Hawk. That would be a good way to start the day… run the ridge before the day triggers and cash in the 60 miles for free. Then the forecast showed a shower in the Harrisburg area; maybe I could skirt around it by going NW? It drove me crazy because it looked like there was a path toward a big flight, if I could just find the right way to go.

I had no less than eight 500km+ triangles in my Garmin, ready to go if the weather changed. The night before, I settled on one that I liked; Upper Reservoir –> Tussey (near Woodward) –> Reading –> Fairview Lake –> Upper Reservoir. I didn’t get much rest; the gears in my mind churned away.

Bill Thar graciously let me use his ship on this day. I took hold of the opportunity, figuring the performance would help. It surely did. When I launched at 11am, the lift was spotty. A couple hanging, wispy cu over the ridge that didn’t do me much good. I found the climb near the Delaware Water Gap down at 2400ft. Looking back toward Blairstown, it seemed it was cycling down. At 5000ft, I decided to get out of dodge and on my way.

Most of the clouds were not working and the lift was far apart. It seemed like whatever moisture got up to cloudbase just hung around there. Nice looking Cu lied. This was a risk-minimization day.

And it worked out very well. I took pretty much every viable thermal in my path and deviated for anything that looked promising. I floated at 80 knots, a very comfortable angle in the Duckhawk. In the good air, the automatic flaps clicked and clacked away. Those couple hundred feet every glide paid today.

This was especially the case when I transitioned into the Pocono Plateau. This is high ground; good lift, but with not much room to work with. I tiptoed through the area, keeping fields in my pocket, but gingerly working all the air along the way. The clouds that worked had a higher cloudbase than the rest. I was very happy with this segment of the flight; I felt that I walked the tightrope to stay connected nicely.

Across the high ground and I see the Susquehanna valley of death ahead me. I climbed as high as I could. I thought about deviating to stay with the high terrain, but the clouds didn’t look promising there. I had to throw my lot in with the valley and floated on in.

The sink between the thermals was horrendous. It paid big to stay with the lines. For the most part, this worked out fine. But at one point I started dropping out into the valley. Any thermal would do and I struggled up to 4,500ft. The lift was hardly working higher and I moved on. I was at the edge of my seat the whole time, getting into lower and wetter ground. But the air was actually very nice. I managed to go many miles just floating along, well below cloudbase. I don’t know how I pulled that off, but it certainly made the difference; there were hardly any thermals along the way there…. I would’ve climbed if they worked!

Curiously, the thermal I did hit was pretty much in the middle between the two branches of the Susquehanna River. I was a bit leery going in there… figuring this about the lowest ground around. But over some infrastructure, the thermal popped up and gave me enough to make it over to the ridges on the other side. Phew!

Pushing through a lot of sink, I finally flopped over to the extension of Jacks Mountain. 5 knot thermal! Yippee, I made it across! 6300ft and nice clouds in front of me all the way to Seven Mountains. It’s 1pm and clearly the conditions had finally kicked *on*. What to do but speed up to 90 knots and start rocking and rolling?

Now I’m at the edge of Seven Mountains contemplating whether I should back track or make a death dive to Tussey. My turnpoint was on this ridge and it was going to be oh so painful to go backwards. I opted to make the transition, keeping the fields in check off of my right shoulder. Diving to 100 knots, I punched through the sink and made it across with 700ft to spare.

At this point, I finally appreciated the entirety of my blunder. Ahead, the few clouds were torn up. A thin band of cirrus moved in. The wind was showing 10 knots from 300; the ridge isn’t going to save me. Gulp.

I started settling down. Come on baby, any bubble would do. I kept settling… and settling. I am paying a lot of attention to the not so great fields at the base of the ridge. I keep settling, not a burble. A little bump right before a gap, not enough to turn in. I crossed the gap and found nothing on the other side. My only hope is to turn back and hope to work that little bubble.

Ridge pilots know that this is an incredibly desperate thing to do. Turning back rarely does you any good. I found a bubble several hundred feet above ridge top, though it was just barely working. In fact, for several minutes I was just slowly losing, drifting along with it. I felt so totally screwed at this point. That field at the base of the ridge has my name on it, that’s for sure.

But then it picked up to 1.5 knots. One turn, two turns, four turns and the mountain is slowly dropping away. Well who would have thought?

I struggled up to 4000ft, at which point it started falling apart. A sigh of relief and I glanced at my Garmin to check on my turnpoint. Only 3.5 miles further. A promising cu ahead. It would be painful to turn home with the turnpoint so close; I edged forward.

Settling down. Under the nice cu, nothing but diddly squat! I am now beyond the turnpoint, searching for something, anything off of the ridge. Oh Daniel, you stupid dope! You’re now going to land out after having had that improbable save!  No way you’re going to get lucky a second time!

Now several hundred feet above the ridge. Another measly bubble, not good enough. I crossed another little gap, no joy. Another field picked out and I made another desperation attempt for that bubble behind me. Down to 200ft over ridge top and it just barely picked up. 55 knots, heart’s racing. One eye on the field, the other eye on the ridge. Airspeed, yawstring. Don’t turn into the mountain. I fell out of the back side of this narrow thermal almost every turn. I had to remind myself to breathe every once in a while.

I was astounded. I was now edging my way up over the mountain, up to 3000ft. Oh damn it, not high enough to go across Seven Mountains! I dejectedly pushed upwind to the next cu. Good air… good air. Bang! 2 knots! I tightened into that sucker and started spiraling up… 4000ft, 5000ft. I’m out of the doghouse now.

I was exhausted. My body ached as the pressure finally subsided. I felt like a wet noodle. With the tailwind and true airspeed bonus, I was doing 105 knots. I was perfectly content to just float this one out, no rush. No more of this low altitude nonsense.

The lift perked up a bit now, but it was still hard to center and far apart. Any reasonable thermal, I was taking it. Probably the most fun moment was up at 6800ft after leaving a thermal. I picked up to 90 knots and just hit a thermal smack in the middle. I hauled on the stick and catapulted straight up. The flaps kicked right in and I gained 600ft on the one pull. Very nice!

3:35pm and at the turn. Just make it over the ridge and you’re home free. 2.8 knots in the thermals, no sweat… there’s plenty of time. Just stay high and float on home.

By 5pm, I crossed my finish at the Upper Reservoir. Thoroughly pooped out, I called it quits pretty quickly after that.

Thanks Brandon for towing and Ron for running the line in the morning! Aero Club Albatross did really great yesterday; 22 tows on a weekday! I think this is a record for club operations! And thanks a million to Bill Thar for letting me fly your spectacular ship. It made the difference today.