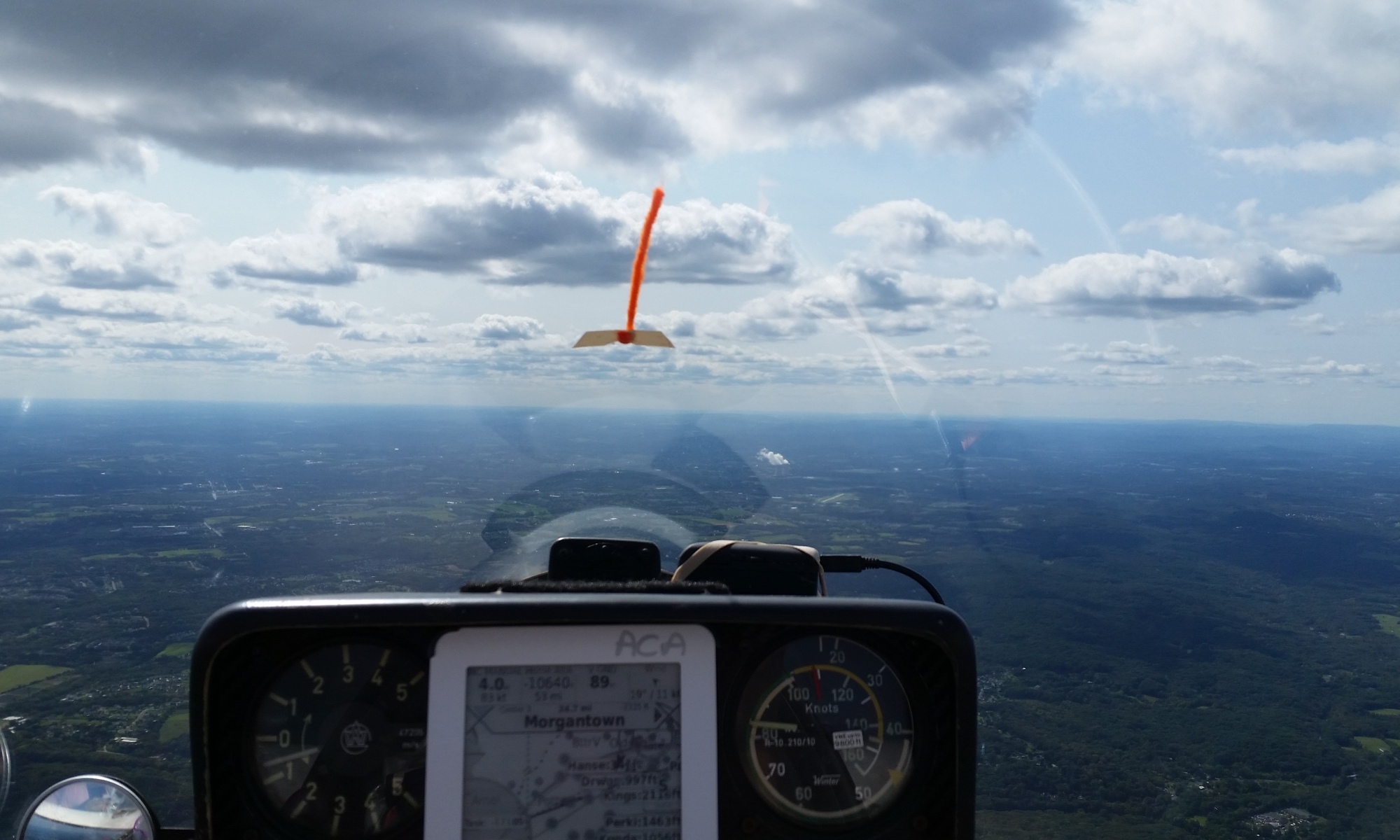 I was glad to be back home. A month after getting back from Lithuania and the Junior Worlds, it was time to return to the sky. We had a reasonable crowd at Blairstown and it looked like it would be a good day. You could tell autumn was right around the corner, with the air crisper and the leaves just starting to change color. All I wanted was to see my friends and fly.

Once I got to the airport, Bill Thar asked me what my plans were. I told him, “No idea!” He asked, “Want to do the South Cup? We haven’t been down that way in a while.” I thought about it for a bit and weighed the prudence of flying this task in the club LS3, which does not have a working trailer. If I was to land out, we would need to use Bobby Templin’s, which would be a hassle, but it would work. Sounds like a blast and gee, it would be nice to fly in the valley for a change. I replied, “Sure! But let’s do it clockwise. It would be a change of pace from how we normally do it and be more fun.”

Later, Bill asks me about team flying, how it works and what are the goals. I give him the basic rundown and we agreed to try out. So close to 1pm, we get in the air. The Cus were popping and the wind was blowing just a bit beyond NNE. No issues climbing up off of tow, though it got really tricky around 3500ft. Seems like there was some sort of wind-shear and the thermals were not happy with that. I floated around, went to the other side of the ridge and couldn’t easily pop through that layer. “What a beautiful mountain,” I thought.

I hooked a climb over the Upper Reservoir, though it was agonizingly slow given the nice shape of the clouds. Bill radios, “4 knots, climbing through 4,000ft over the town.”

“Heading your way!” I exclaimed.

Sure enough, solid lift under the street. Above 3500ft, the lift firms up and no problems getting up to 5200ft. We’re ready to start.

I started first and Bill started a minute later. He caught me in the first climb, nearby Hackettstown. On the next glide, we get off each others wingtips and are floating along in the good air. Two clouds later, Bill gets 600ft higher than me in his Duckhawk and I release him. So much for that.

Getting into the Somerset sector, I looked ahead and realized that I’m flying over Trump’s country club and golf course. Thanks to our President’s love of vacationing here during the summer, Blairstown has been shutdown due to the Temporary Flight Restrictions anytime he comes. I looked temptingly at my pee bag, but then dismissed the notion. I don’t litter and this was not a good time to start.

But anyway, I noticed how close I was to New York City. The skyline was totally crystal clear. I even saw Philadelphia from there. As I entered the sector, I realized that I caught up to Bill. But looking into the sector, I had no reason to go any deeper. And I noticed I was getting lower and lower. I nipped the sector and turned while Bill kept going. That’s the last time we would see each other that day in the air.

After turning, I looked over at the possible choices ahead. I thought to myself, what would Noah and JP do here? So I asked, “Left or Right?”

Noah ponders for a moment and then remarks, “Agreed.”

Another moment of consideration and figured they were correct. Let’s go right.

The street started working quite well, though I was lower than desired, somewhere around 3500ft. First thermal I hit, I started climbing at 3.5 knots. Up we go!

As I’m getting to 4300ft, the thermal weakens. JP quipped, “Ready”. Noah said, “Two knots!” I looked ahead and figured we could hook a good one in the next couple clouds.

I could tell Noah was annoyed, but away we went. Sure enough, there’s 4.5 knots, right up to cloudbase. The conditions were looking really solid ahead.

JP rolled off my wingtip, and we head out toward the Delaware River. JP says, “80 knots?” Didn’t take much convincing me, “Eight zero!” I replied.

Noah files in shotgun and we’re now blasting along. 4 knots, boom, bank and yank. Man, the LS3 is flying really nice today! Roll out under the street, with the ten knot tailwind.

“Eight Five,” I replied as I pushed the flaps into negative. We’re now all barreling along toward an open quarry two miles near PGC. Boom, five knots up to cloudbase. Very nice!

Looking at the sky ahead, it’s starting to lose its definition. But, man the going was still good. We’re driving along and finally hit 3.5 knots at 3500ft. We turn in, start climbing, but I am eyeing the nuke plant near Pottstown.

JP says, “Wouldn’t it be nice to hook the strong climb over it, drift in the turn and anchor the leg there?”

Noah replied, “Dunno, looks soft in there and we’re in a good climb now.”

I’m looking ahead and think it just would be really fun to glide in and see how that would work out.

So they’re arguing back and forth and finally we’re at 4000ft and the thermal weakens. JP says, “Ready”. Noah says, “Where are we going if it doesn’t work?” I just look out ahead and say, “Looks fun, let’s go!”

As I left, I heard them bickering for another 20 seconds.

“Why leave a working thermal, low and into a weaker sky,” Noah exclaims.

JP retorts, “But the geometry is perfect and man wouldn’t the climb be great?”

It’s amazing how candid your teammates can be when they’re in *your* cockpit. But soon enough, everyone is quiet and is just watching this glide unfold. At 3000ft, I am right over the plume. I feel the turbulence, but it’s not really solid. A couple searching turns downwind and the whole thing is a dud.

Noah smiles and shakes his head saying, “Look, there’s Daniel getting himself into trouble again!” They then start arguing back and forth about who was right, though I am getting too low to be distracted. I turned the volume down, thinking my teammates can’t help me right now…I gotta dig myself out of the dirt.

I turned downwind, figuring I must find a climb before I turn upwind. I drive along for a good twelve miles, bumbling and sniffing the whole way with not much success. Finally I find a climb well in the Morgantown sector, well further than I intended to go. I climbed up to 3500ft and felt that the air was good along the line. Going upwind, I stair-stepped my way back up to 4700ft. It was time to move on.

The sky ahead was not looking all that great. The day was decaying, drying out and the clouds lost their definition. Now Noah slides in off my wingtip. The goal was to avoid trouble.

So we were gliding along getting lower and lower. Finally we hit a thermal at 3500ft and made a big searching turn. The cores were not all that defined and the wind shear was making it tough to stay there. I’m climbing up and then going down on the backside of each turn, making big adjustments to climb.

Then I hear Noah say, “Better over here.”

I see a gaggle of Broadwing hawks, maybe seventy of them climbing up in the core and gladly join them. Up we go to 4500ft. I said, “Ready”

“No, we need the height,” Noah replied.

Begrudgingly I agreed. We stay another three hundred feet and leave.

As we approached Kutztown, we hit a lot of sink,

We get down to 2300ft behind the hill, pondering what to do if this next cloud doesn’t work. But no matter as it does work and then some. 4.5 knots for a 3000ft climb to 5200ft should do the trick.

It’s 4pm and the sky is clouds are almost gone. We’re over Kutztown proper and I heard Mike Opitz remarking, “You’ve got to be somewhere at the top of the band at 4.” We’re trying Mike, we really are. But with not much success. Each glide is long and most of the (sparse) clouds are not working. Finally, we got one more and it’s enough to make it over the ridge.

I looked toward the ridge and the sky was really flattening out. I could tell Noah is getting antsy. The valley was shutting down, but I was not worried. I figured that with the sun coming around, that it ought to cycle in ahead.

I said, “Don’t worry, we’ll find something on the other side.”

So we cross the ridge near Snyders, where a cloud had recently dissipated. Down to 2700ft, it’s not looking great and we still need to hit the turnpoint ahead.

After a bit of internal debate, I started arcing slowly to the right. Heck with making a perfect turn, we gotta stay in the air.

So we turned toward the right, figuring that we had Flying M and possibly Slatington made. With the wind more or less NWerly to NNE, it should trigger some thermals along the face.

Down at 2300ft, we found one nearby Bakeoven Knob. I could hear Noah’s sigh of relief, though I said, “Don’t get distracted now, we’re not out of the doghouse yet.” The thermal petered out at 4000ft. It’s time to move on and we kept floating high, along the mountain.

I smiled as I thought, “Home sweet ridge!” We hooked a nice one over Palmerton, up to 4700ft. Next glide was a bit of trouble, though we found good stuff just beyond Fitch’s Quarry. Only 1000ft needed for final glide

I mused, “Wouldn’t it be cool to float along the ridge and then just hook the turn by the Upper Reservoir?”

Noah came back with, “That sounds like a terrible idea.”

I laughed and agreed.

So two turns later and up to 2700ft nine miles out, we climbed up for final glide and decided to avoid chancing it. We made the glide right over the Delaware Water Gap and at one point just 400ft over Mt.Minsi, enjoying how the whole valley was lit up by the autumn sun.

We hit the finish cylinder three abreast, right at 1200ft, right on the money.

I miss you guys.