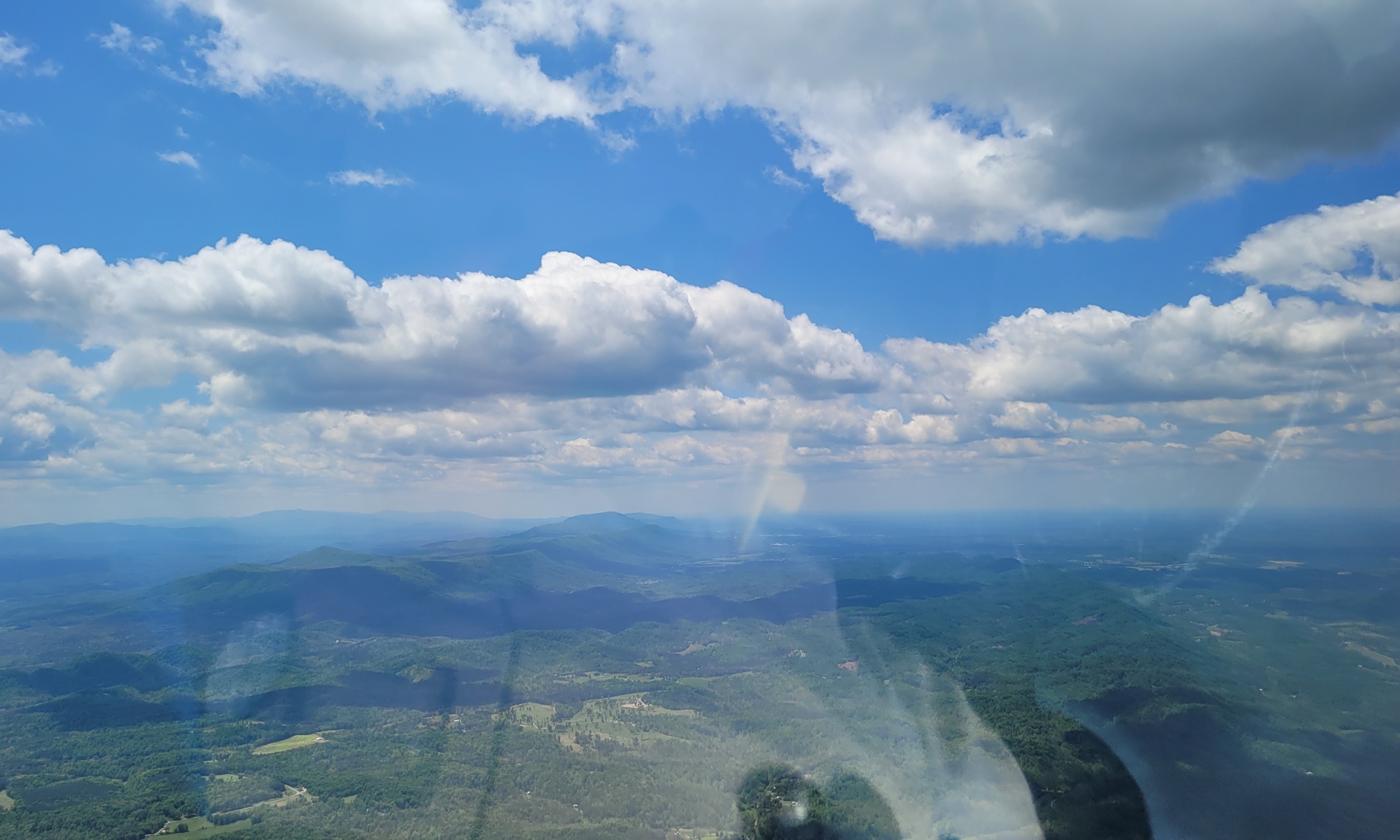 Today was a spectacular soaring day at Chilhowee. Everyone knew it too in the morning, with the cool northwest wind already blowing and high cumulus clouds forming as we untied the gliders. It was so chilly that our morning pilot briefing was moved out of the barn and into the sun. Mark Keene called the meeting to order at 10am, sharing his excitement at the prospect of setting a long task on a good soaring day.

This time we were assigned a 320km racing task. The geometry took us several times over the Chilhowee ridge, with turnpoints extending to the northern, southern, and western quadrants respectively. The challenge was to make effective use of the ridge, transition into the thermals, make the turns, and make an efficient “final glide” back to the ridge for the subsequent foray into another quadrant.

This is bread and butter stuff for a ridge pilot. Looking at the plentiful Cu in the sky, I figured I didn’t need other gliders to mark thermals and could easily roll my own. We launched around noon with 5-6 knot thermals right off of tow. This was going to be a *fast* task and it was better to wait a while for the day to peak. Even better, as the day went on, the wind would swing from a northerly direction to more northwesterly, which was a better angle for the ridge. Instead of milling around with the gaggle, I headed to the northeast end of Starr Mountain to scope out the terrain and climbs to the northern and western quadrants respectively. After stumbling into a 10 knotter and spiralling up to 6500ft, I could see the streets heading upwind as far as the eye could see.

At this point, I felt a bit lethargic and grumpy. There was a lot of time to burn, so I just mosied around in my boredom. I practiced thermalling the LS-4 in various configurations, finding that flattening out a skosh and using considerably more top rudder slowed the glider down into the low 40 knot range in a smooth climb. Further, when manhandling the pitch in a buffet, the glider dropped the inner wing toward the turn despite the yawstring being in a 15 degree slip. Cool stuff! All just ways to entertain myself while waiting for the conditions to peak around 1:45pm.

Closer to 1:30pm, I figured it was time to get into the business of competing, so I flew the 20km back to the start line and climbed up into starting position. At that point, the gaggle dutifully departed, so it was game on! I lingered for an extra eight minutes and hit the line at 1:45pm at 7200ft for a good start. It’s go time!

Going down the first leg, I was hunting for a solid climb to take me to the first turn. The thermals seemed to cycle down somewhat and were a bit more broken up than before. I found many gliders struggling along in weaker, disorganized bubbles. I simply kept driving on and on, figuring that the solid sucker had to be out there.

While I occasionally sampled a thermal here or there, I pretty much kept running off of my initial energy from the start. Getting below 4000ft MSL, though, started to get concerning. But right as my options started to dwindle, I drove into a solid 5 knotter in the blue. That got me enough to make it into Corntassel and out for an efficient upwind run. Then another 6 knot climb made me have a fast final glide to the ridge.

During this time, I put my two Kobos with TopHat to good use. The reason I have two is because the Kobos are not all that reliable, so I have one on a mount as a spare. However, as the task consisted of multiple “final glides” back to the ridge, I would use a turnpoint at the end of the mountain as my go-to on one of my flight computers. This made it possible to fully optimize each climb to get back to the ridge square at ridge top.

In any case, I slid in going 90 knots and drove along Starr Mountain. By now I had dropped the gaggle and was picking up the folks from earlier starts. On the southern end, Rick Scheppe and I tanked up before heading toward Five Barns. The sky out there looked a bit weaker, so I was a bit more patient with 3.5 knots. However, this climb was not ideal as the gaggle started creeping back on my tail. Ryszard and several others caught me in another thermal on the way to the turnpoint, which was enough to make it back to the ridge square at ridge top once more. After another fast lap up the ridge, I picked up a solid 4 and then 6 knotter to cloudbase, having dropped the gaggle once more on the ridge run.

The upwind run to Decatur was absolutely amazing. Aside from two turns in a thermal in the middle of the valley, the entire 38 km section was done without turning in excellent streets. After the turn, I proceeded to run the streets all the way back to the ridge at high speed as well. I have never found such reliable and honest streeting as today. Normally such clouds work only at cloudbase, perhaps 1000ft above and you have to work really hard to stay connected. Instead, the lift seemed to work all the way down the band, allowing for a spectacular glide for all.

After hitting Sugarloaf, it was simply a 90-100 knot ridge run home. And arriving at 4:30pm revealed that only several gliders had made it back. I had managed to start late, overrun the gaggle, and end up in the front. And sure enough, I turned in 72.5 mph for the day win today. It was a day that rewarded pushing hard and settling for only the best lift; very much like my days hosting US Nightly Soaring ridge tasks. It’s amazing that such days actually exist in reality!

Thanks Aero Club Albatross for supporting me at the Club Class Nationals with their wonderful, restored LS-4! Certainly all the more fun when things work out well!