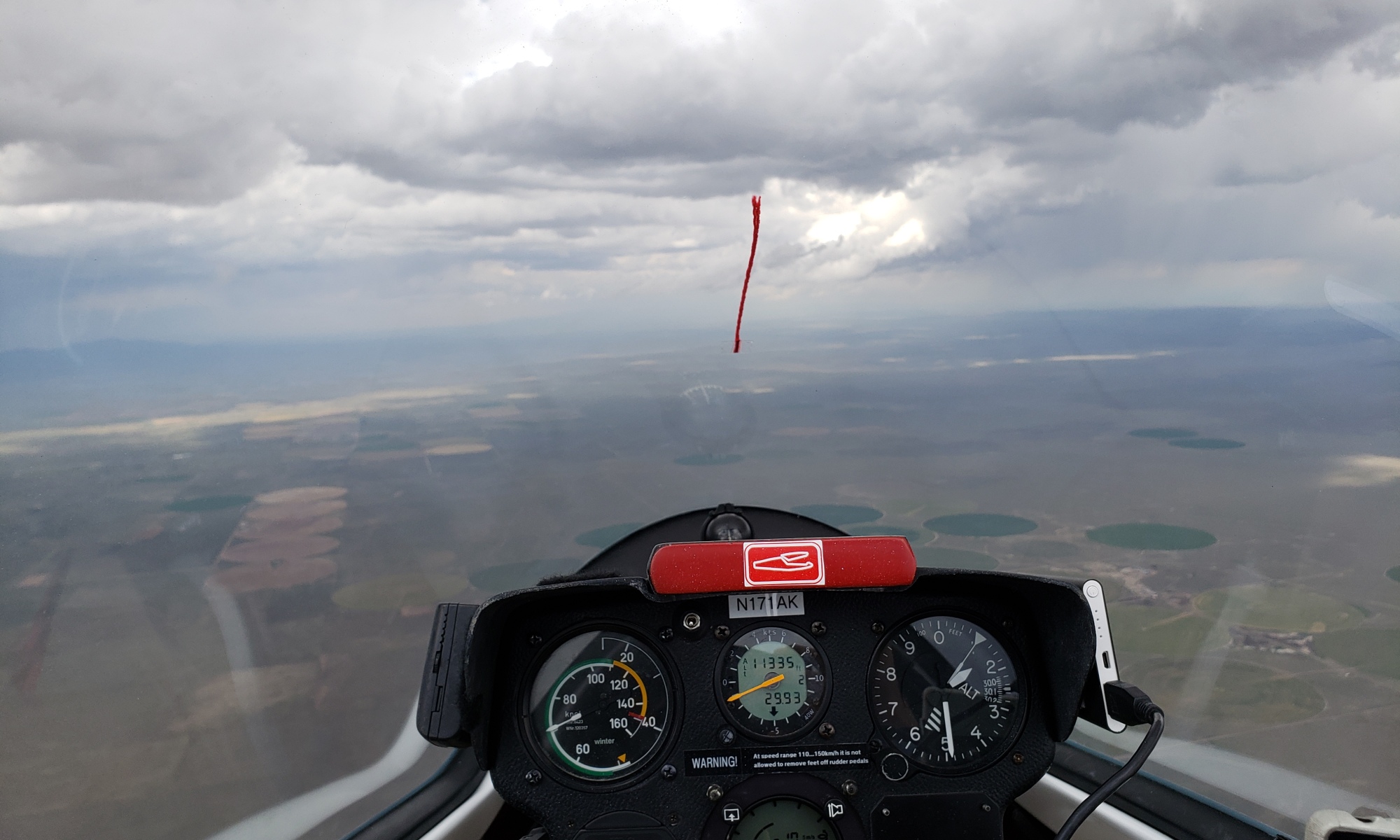 Today was Day Two of the 1-26 Championships. As Contest Director of this competition, I am not a contestant. However, Mike Carris, a local pilot was gracious to let me fly his LAK-17 to get some airtime in the beautiful Moriarty sky. The conditions have been challenging, with a lot more rain and thunderstorms than is typical for this time of year. But in any case, on June 3rd, we finally had a shot at doing some soaring.

It took a while for the day to get going. We had to send several rounds of sniffers up, before one finally stuck at 12:45pm. We changed the task to a pilot selected option as the conditions looked iffy for the original task. By 2pm, it was gangbusters. It was easy to get up to 13,500ft and areas of convergence and streeting to the east of the airport.

Once I found the line, I managed to stay connected fairly well. Aside from two lower spots that almost had me running back to the comfort of the airport, I climbed up nicely and managed to make a very nice into the wind. The wind picked up quite a bit, up to 30 knots at times. But the consistent lift made progress slow, but steady.

After I made it down to the restricted area to the south of Moriarty, I turned around and started heading back. The sky turned an ominous gray and there was hardly any lift. I had 2500ft MC 5 margin on the airport, so I wasn’t concerned when I slowly settled for 40 miles. But then there was a patch of sun and I stumbled into a little 1 knot bubble. Looking down at the airport, I saw a bunch of the 1-26 pilots landing in the windy conditions and figured that this was a good way to let things get sorted out on the ground.

Little did I know what this 1 knot thermal would turn into.

Five minutes later, the thermal started picking up. First to a solid 3, then to 5 knots. Little wisps started forming above. This looked interesting, especially since I was below a solid, overdeveloped deck of clouds.

I pushed forward a bit and found rocking solid lift under another set of wisps. One turn and the variometer pegged. By the time I completed the turn, the lift was up to 20 knots, the dial on the Cambridge vario had went all the way around back to zero.

I pushed the nose down to avoid getting sucked into the now better defined clouds. The airspeed crept up to 90 knots and I was about ready to pull the brakes. At that point, I got in front of the clouds and pulled up. Between the pull up and the lift, I gained 1,400ft in 30 seconds.

At this point, I felt a bewildered excitement. This was really odd and spectacular, I couldn’t figure out what was happening with these special little Cu which started to look more and more like a shelf. Maybe the convergence was kicking back on again? As I started heading to the south again, I found solid, smooth lift. This might work nicely for a short little lap before calling it a day.

Then I hit another bout of very strong lift. There was no longer a shelf off my wing. I looked over at the altimeter and it wound up through 15,000ft at an alarming rate.

I looked up at the overcast above. Then it dawned on me. That strong bit of lift was not localized. That solid overcast above me was not OD. It was an embedded thunderstorm!!!

And just like that, a switch went off; I better be down on the ground NOW! Lickety split and it does not matter where I end up. I turned 90 degrees, away from the lift. Right as I opened the brakes and dumped the nose, it started to hail. Looking at the airbrakes, I saw splotches of white where it started to ice up on the metal.

I looked at Estancia and Moriarty airports. At this point, all I cared about was getting down on the ground as quickly as I could and away from the building storm. But looking at Moriarty, it still looked like a reasonable place to land. I swung around and descended rapidly.

The windsock showed 15 knots of wind from the south. As I entered the pattern, I saw heavy rain and virga to the south of the airport. Figuring a gust front might be forthcoming, I kept a lot of speed up in the approach and landing. Several minutes after touchdown, it started raining at Moriarty and lightning was going off nearby. I sat in the glider to keep it safe for about a half hour in the rain. After the rain subsided, Alice and Mark helped me make the long journey back to the hangar.

In 12 minutes I went from just barely hanging on to scraps of lift, to being in shear terror of being sucked into a thunderstorm. Seeing how quickly the storm was developing, if I hung around for several more minutes, maybe even seconds, I probably wouldn’t be here to give this account.

This was my first experience with an embedded storm. The thing that caught me most off guard was that the air was so dead for so many miles. I’ve been around localized thunderstorms before; you see them develop and you give them a wide berth. But in this case, I had no idea what was lurking above the solid deck of clouds. It was only when I realized that the lift wasn’t isolated to one spot that I recognized the danger.

I learned several important lessons from this experience. The first is that given the right atmospheric conditions, a thunderstorm can develop anywhere in a heartbeat. The second is that it can develop over you, even if the sky looks dead. The third is that if the lift gets too strong, don’t linger in curiosity. Get the heck away from there and down quickly!