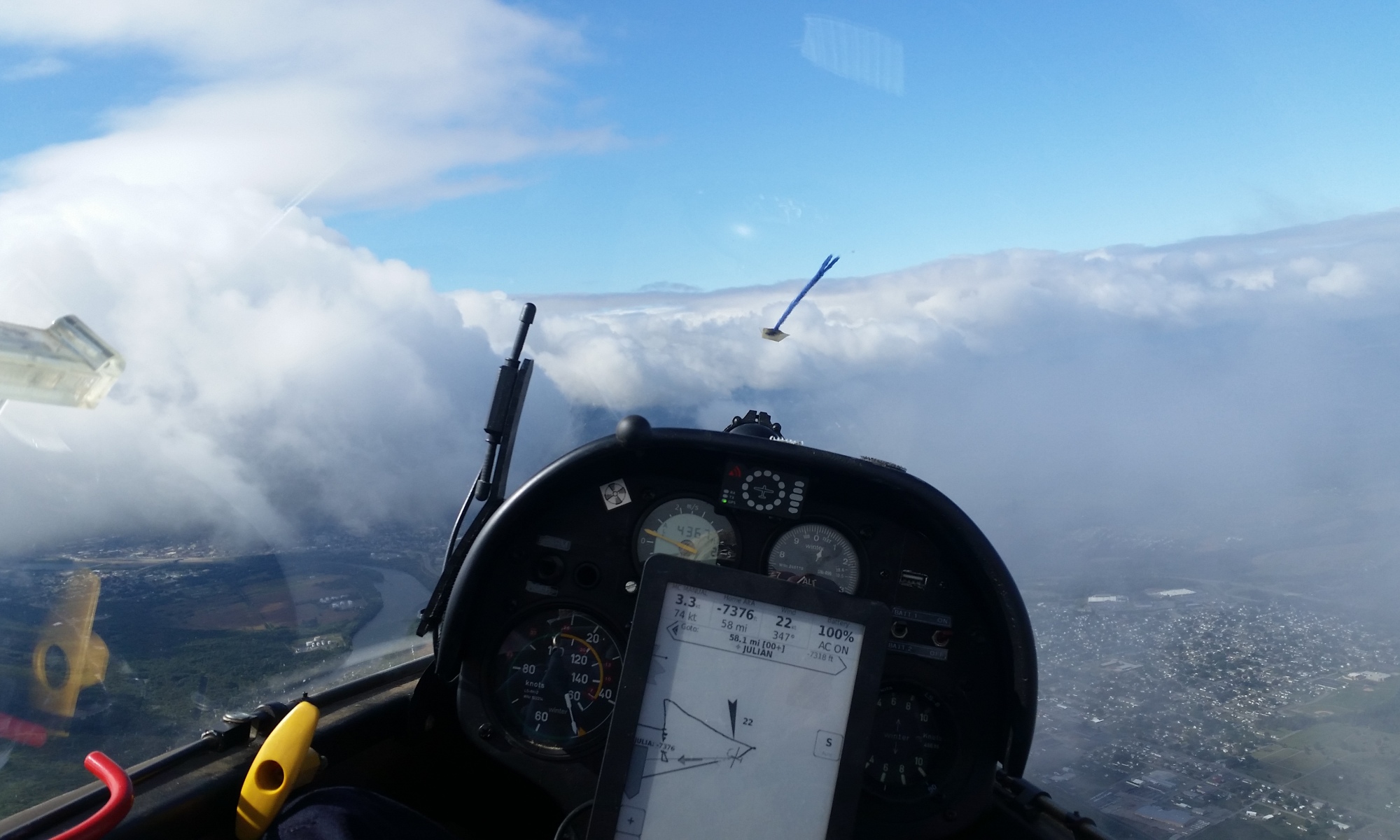 Figuring it was time to take a break from sanding trailers and time to see my friends up at Penn State, I made my first pilgrimage to Ridge Soaring this past weekend. The soaring weather looked reasonable, with a weird fast-moving low coming through on Saturday and a high pressure day for Sunday. Looking for a glider to fly, Rob Dunning was incredibly gracious to let me borrow his LS-8! I was excited to add another LS glider to my logbook and see how a true, modern Standard Class glider flies. And Phil was kind enough to let me crash at his apartment near State College!

Saturday morning brought a low overcast deck though with a brisk North wind. We didn’t really rush out to the airport as it did not look all that great and it was clear that convection would not kick in for a long time. Finally around 11am we mustered up the motivation to give it a go. Furthermore, the Foehn gaps (also known as wave windows) were punching through the overcast… perhaps it was possible to get in the wave?

Once in the air, it was clear that the ridge was working okay, though the angle was quite far off. However, there was definitely wave about and the mission became to get into it. I shot off toward Eagle Field, eyeing a gap upwind of Bald Eagle. I found rotory-thermal stuff and worked toward the gap, though it started to close in. Instead, the Tussey Gap (near Spruce Creek) got nicely defined… let’s go there instead?

The goal now was to climb as high as possible and try to make a nice downwind run into the wave. I finally hooked a decent thermal over Bald Eagle and just started drifting in it. A little over three miles later and 900 feet higher, I was still not at cloudbase and evidently I found the down part of the wave. I had to move on.

I aimed for the gap and looked for the best defined rotor clouds. Down around 3000ft, scratching around, it was not really evident where it would work best. I ended up flailing around and slowly sniffing around in the rotor. The flight log looks quite a bit clean there, with an eventual transition into a 4 knot rotor thermal. But it sure didn’t feel that way… perhaps it was that the wind direction was far enough off that falling onto the ridge in that area would not have been all that fun.

But nonetheless I climbed in the thermal up cloudbase at 4600ft. Much more comfortable now, let’s see if we can get above the clouds. This window was not a very cleanly defined window and it was a bit tricky to find an easy place to transition into the wave. I sped up, looking at the ground to see where most of the sun was and would pull up and climb where the cloudbase was higher. It’s hard to say when I got into the wave because it was a constant stair-stepping in wave, back into rotor and then into wave again.

But eventually, I was halfway up the clouds and it was simply gorgeous. It was quite a bit warmer with the autumn sun beaming down from the turquoise sky. The sky had a joyful feel to it, not like the deep-blue morose look we will get in several weeks. The glider was flying so incredibly well too. I was amazed at how well the controls were harmonized. All you have to do is think about where you want to go and the glider will ease into that direction. Nothing happens abruptly, everything is graceful. And the glider does not “hunt” in the roll axis. It will track exactly where you want it to, both in turns and in the run. And of course the LS8 *goes*. I don’t think I had ever felt one with a glider as quickly and effortlessly as I did with this ship.

Anyway, the wave was pretty interesting. Since the wind was not getting stronger with altitude, it was clear that the wave was not propagating vertically all that well. As a result, the wave was quite shallow and bending back with the wind, rather than leaning forward. This meant that to keep going up, I had to follow the shallow contour above the clouds. And when flying straight, this required going around the bigger clouds, through canyons and gullies. For a ridge pilot, this is just so incredibly fun. There is something surreal about ridge soaring a soft mountain!

Some other characteristics of this wave were that it was solely in the inversion layer, which went from 5000 to 7000ft or so. It was not all that strong, though there were a couple places that it was reinforced. Notably, this was over the convective rolls or “streets” that came from the Great Lakes. These areas had more moisture and were generally filled in below, though the cloud shape was markedly better. I managed to find stronger lift where the street and wave converged.

After getting up to 7500ft, the wave petered out and I decided to do some ridge flying. I saw a hole NE along Tussey and went there. Seeing nothing further, I dove out and got below the clouds. Boy it looked gloomy and it was quite a bit colder too. I transitioned to ridge flying on Nittany and drove along. But man, this glider is so beautiful and graceful, it felt like a crime to fly it down on the trees. About 200ft above, somewhat more gentlemanly felt better.

Over at the Talladega transition, it was clear that it would be quite a bit different from the normal routine. With the wind spilling over the bowl, it would not generate the good air that makes this jump a straight shot. I dipped my toe into that area, found crappy air and retreated back. After taking a thermal, I just went straight across to Bald Eagle with no issues.

Hanging a right toward Williamsport, I saw a nice break in the overcast. Looks like wave again! Right at the end of the ridge, there was a nice street and a beautiful Foehn gap. Let’s see if we can connect here.

The street/rotor/ridge reinforced thermal was as advertised: 6 knots up to cloudbase. Two extra turns to build up speed and I shot up the street. After seeing a clearing, I yanked back on the stick, straight into the wave. Man couldn’t it be this easy all the time?

That wave got me up to 8400ft. It was considerably better defined and broader than the Tussey wave. It probably had to do with the plateau being much better aligned and shaped, which was likely triggering the wave. After floating around for a while, I explored the boundaries. Other than where it was reinforced, it was quite weak, just enough to slow down my descent. I mozyed SW of the hole, seeing if I could find a hole toward Julian. No hope whatsoever, totally overcast. But man, it was so cool looking at the undulations in the clouds. You could see subtle waves and ripples that were not strong enough to punch through the overcast. It was surreal seeing this solid ocean of cloud… it felt like magic.

Anyway, I dropped back below the clouds and headed toward Julian. I had no inclination to drive along the mountain and was delighted to see a rotor line to follow. I realized that I saw the line in the clouds, though it was just not strong enough to generate a solid gap. After flying the line for a while, I ended up floating along the top band of the ridge. Oh well.
Getting back beyond Howard Dam, I saw the high pressure system building in and it was now convectively active. Yay, now I can go and thermal this ship! I found a street just before Milesburg and worked my way into the plateau. Man, this glider thermals soooo nicely! When it buffets, it whispers in your ear, “Can you please speed up a little?”

I worked my way 20 miles upwind of Julian, just on the edge of comfortable glide. I had no interest in going farther into the rugged forest at 4:45 pm, so I made a fast and fat final glide back. After zipping over the airport, I made a short lap in the weak ridge lift and turned around when it got soft beyond Eagle Field. Just shy of six hours, I called it a day and landed.


The following day, Phil and I decided to practice team flying. We talked about how it works and we launched into the weak, bright blue sky. The day truly defined “severe clear”. We got together pretty quickly and floated along to a thermal SW of the airport. It was a nice one! Climbing up, we figured we could keep going. Beyond Eagle Field, we saw a nice cut of ridge and Rt.99 cutting through it. Surely it has a thermal? Not really…

And no! Getting a bit lower, we decided to stay with the field than going farther in the marginal terrain. And there was nothing but bad air near the field. Oh well, 35 minutes later I dropped the gear and headed in.

Phil and I coordinated the landing
beautifully. I made a tight pattern and went long and Phil came in behind me in his floaty ASW15. All of the Condor practice paid off on this one… the field had *a lot* of slope. But the landing was beautiful and I stopped quick in the cut hay field. When I eased off the brake, I rolled back a couple inches. Oh no, back on the brake! Then I eased off again and moved back a hair. I got on the radio and asked, “Phil, are you rolling backwards?” Didn’t get a reply. But then I let go again and was stopped. I gingerly opened the canopy… And then got out… And ran to the tail and turned the glider 90 degrees. Phew!

Then I saw Phil and we started laughing hysterically. I don’t think either of us had ever been down on the ground so quick. We only went ten miles or so!

But it actually worked out very well. Phil did a great job learning the basics of team flying and it was a real blast flying together. Consider it a team building experience to lawndart together!

John Bird drove up and brought us back to the airport. We then picked up the trailers and self-retrieved.

Followed by dinner and then a long journey back home. I was in bed at 1am. Totally worth it!