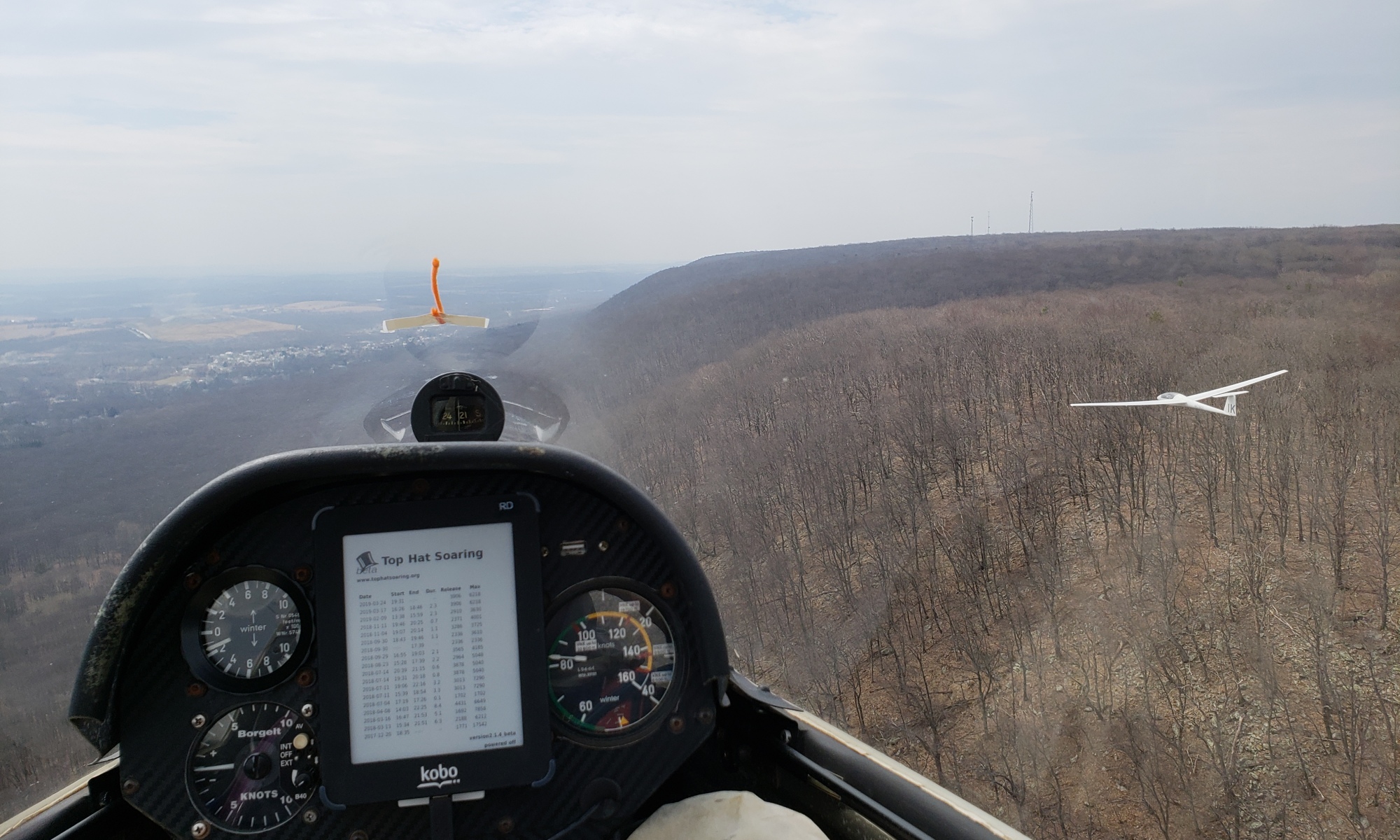 Saturday was the first busy soaring day of the season and it started rather quietly. I had a long, stressful week and was eager to get in the air. On Thursday, I noticed that Saturday looked promising, but tricky. The morning was forecast to have significant mid-level moisture and a low inversion that would keep the SE wind from mixing down at ridge top. By the time the wind picked up in the afternoon and the low inversion burned off, it would shift quite far west of south, possibly even 205 degrees or so. With the wind upward of 25 knots at ridge top, the ridge still ought to work, especially floating home in the high band with a tailwind. But since it looked challenging, I stayed quiet about it, hoping to wander my way into Pennsylvania unnoticed. Apparently the whole club was quietly watching this day hawk-eyed too, because at the last minute everyone and their mother decided to give this one a go.

My day started at 6am. I got to the airport early to get the LS4 and Cow ready to fly. The Cow worked out nicely for three checkflights early in the morning. Andrzej also took his first flight in the LS4 (and did a great job too!). By the time I finished up my last check flight, there was total mayhem on the ground. Gliders, cars, arguments, golfcarts, pilots, airplanes, everything all over the place in a frenzy trying to get organized and ready. I looked up at the sky and saw that the sun burned through the thin cloud cover and was heating up the ridge. This started burning off the inversion and the wind gradually mixed down; the ridge was working earlier than expected! I felt pressured to get the glider over to the grid and felt I was getting caught up in the frenzy. I finally realized this after I got the ‘4 to the grid and said enough. I sat down at the picnic table and started getting myself into a flying mindset.

I remembered Oddball from Kelly’s Heroes and how he would say, “Why don’t you knock it off with them negative waves!!” A smile and a chuckle under my breath, I decided my mission today was to have a fun flight. I strapped in, closed the canopy and took off, happy to depart the earth below me.

A quick tow and I was on the ridge. A quick lap on the local ridge and I felt connected. Bobby was waiting for me and we headed SW bound. The ridge was working quite nicely and we had no trouble zooming along. We stayed together all the way down to Lehigh Gap. Now the ridge started getting soft.

Soaring a ridge is like playing music with a band. There’s a rhythm to the gusts and thermals, a cadence to the variometer’s chirping and a tempo set by the sailplane’s airspeed. And when the ridge starts to soften up, it’s like the instruments get out of sync. You feel like you’re trying to keep the jam going, but you’re forcing the tune.

In any case, I saw my airspeed bleeding off and finally decided I didn’t want to keep playing anymore. And then I made a mistake. When the music stopped, I hesitated on the first bump. If you’re going to turn around on a soft ridge, you better do so in a gust to avoid losing height in the 180. One bad move and you will slip below ridge top in a heartbeat. I kept going to the next bump and regretted it when I turned around. But then I saw Bobby heading my way and we converged on a little thermal, at 50 knots, square at ridge top.

We thermalled beautifully together. When Bobby joined me, we S-turned in sync. I have never thermalled off a ridge in such harmony with another glider; we were doing the air combat maneuvering “scissors”, each of us tucking in behind the other on the far side of the S. Several hundred feet above the ridge, we seamlessly transitioned into full turns. We were comfortably at 2200ft in a jiffy. Much nicer, in the high band and we high-tailed it back to friendlier lift to the NE.

Re-established, I reassessed the day. I figured that the local lull was caused by the inversion. The inversion probably hadn’t burned off yet and it was going to do so any minute. The sun was finally cooking and it was prime time for the stronger winds to kick in. On hitting the next thermal, I climbed up to 2500ft and worked up my courage to head SW again. I’ll just ride the thermals this time. This worked great all the way down to Hawk. No rush, staying high off of the ridge, waiting for the thermals to cook.

Abeam of the tip of Pinnacle, I felt good air. This must be my line. Several turns, up at 2600ft and I mosied my way up the street. Tiptoeing, I kept my altitude until halfway across. Now the line started to peter out, but I was in a good position for the jump. I kept going, but now in sink. Still looks good. 2100ft and I looked back over my shoulder and at the ridge in front. Decision time, still okay and I went all in on the bet.

And then the bottom dropped out. Now you’re committed, gotta keep going. Fields over my left shoulder, speed at 80 knots. I felt my chest coil up like a spring and my heart rate picked up. Eyes narrowed, tension in my temples, a strong grip on the stick and an intense focus on the corner of the ridge. The wind is southerly, it might not work at the tip. If I get 150ft below the top, I won’t make it over the spur just beyond the corner; I’d be staring at a box canyon, really bad news. Open fields off my left shoulder, left hand already gently resting on the gear handle. I held my breath as I screamed around the corner right at ridge top.

Then the lift kicked right in. As I slipped over the spur I felt the coil in my chest unwind. My intense focus gave way to a full toothed grin and an exuberance permeated my body. “God I love the SE ridge!” Another, more sensible part of my brain quietly watched this unfold, disapprovingly noting that I have to be careful to not overly enjoy this sort of thing. But anyway, this is about the most landable part of the whole ridge and I was fully ahead of the situation. After the angel and devil on my shoulder had their little spat, I decided what the heck, it’s a good day to be flying and it’s fun to occasionally let myself fly. And with that, I enjoyed the wonderful air and whizzed along 100ft above the trees.

Five miles from Muir and I called the controllers up, hoping to drive along through the Class D. The fellow came back with a “No and heck no! We are hot today!” Oh *come on*, they’ve let me pass through on weekends!

“Any chance I can pass through a bit later?”

“Roger that, I’ll turn around NE-bound at Swatara Gap.”

Grumbling, I cursed under my breath. The freakin’ ridge looked so beautiful ahead and I had to turn already! Next time I’d better call those guys up on the phone before I get down here. Dejected, I turned back home. I was annoyed for 20 miles heading NE bound, trying to figure out what to do with myself. And then I remembered Oddball and my mission of knocking off them negative waves. Enough already.

Down at the Pinnacle, and an easy transition back home. The wind had picked up, now west of south, just as predicted. Best to stay higher in the band and ride the tailwind. It’s tricky business when the wind is 45 degrees cross down at ridge top.

No problems all the way back to the local ridge, floating at 80-90 knots at 2000ft. I kept going toward Catfish tower, albeit the ridge softened up a little bit. Better be careful on the more easterly facing sections. Back on the local ridge, I met up with Claudio and we flew together to Hawk. Gingerly floating along, we avoided getting down on the ridge, especially at the Bangor Offset. The upper band was remarkably solid… sometimes we were cooking along at 90 knots! But with the strong headwind, we made slow progress.

On the next lap, I saw Greta with Andrzej and Ryszard. Those guys are having a great time! I was back at the local ridge in a jiffy and figured I’d make a final lap. It would be nice to make five hours for the day.

This lap was only good enough to Lehigh Gap. The ridge softened up again and the sky went completely overcast. This might be the leading elements of the front. That’s enough for the day, time to head back home. The wind shifted another five degrees and I slowed down to 65-70 knots, floating along at 2500ft. Looking at Bangor ahead, my goal was to just coast on home. Battery pretty much dead, my trusty Borgelt vario started making unusual sounds and I turned it off. An eerie silence permeated through the cockpit.

Back on Kirk Ridge, and I started settling down a bit. 2300 ft…. 2200ft… 2150ft. Getting a little nervous, I slowed down to 55 knots and kept the yawstring straight. Back on the local ridge and I’ve got it made. Looking at the Upper Reservoir and it was streaking at an obscenely cross angle. How’s it working down on ridge top? Now that I was back home, I was itching to find out.

Oh you freakin’ wimp. The ridge was working solidly at 110 knots! A short victory lap up to Mt. Tammany and I got the fast ridge running out of my system. It was time to call it quits.

And looking back on this one, I feel a deep satisfaction. I succeeded in my goals of making miles and positive waves.

Thanks a million to Tommy for towing and Aero Club Albatross for giving me the chance to take the beautiful LS4 on the most extraordinary ridge in the world!