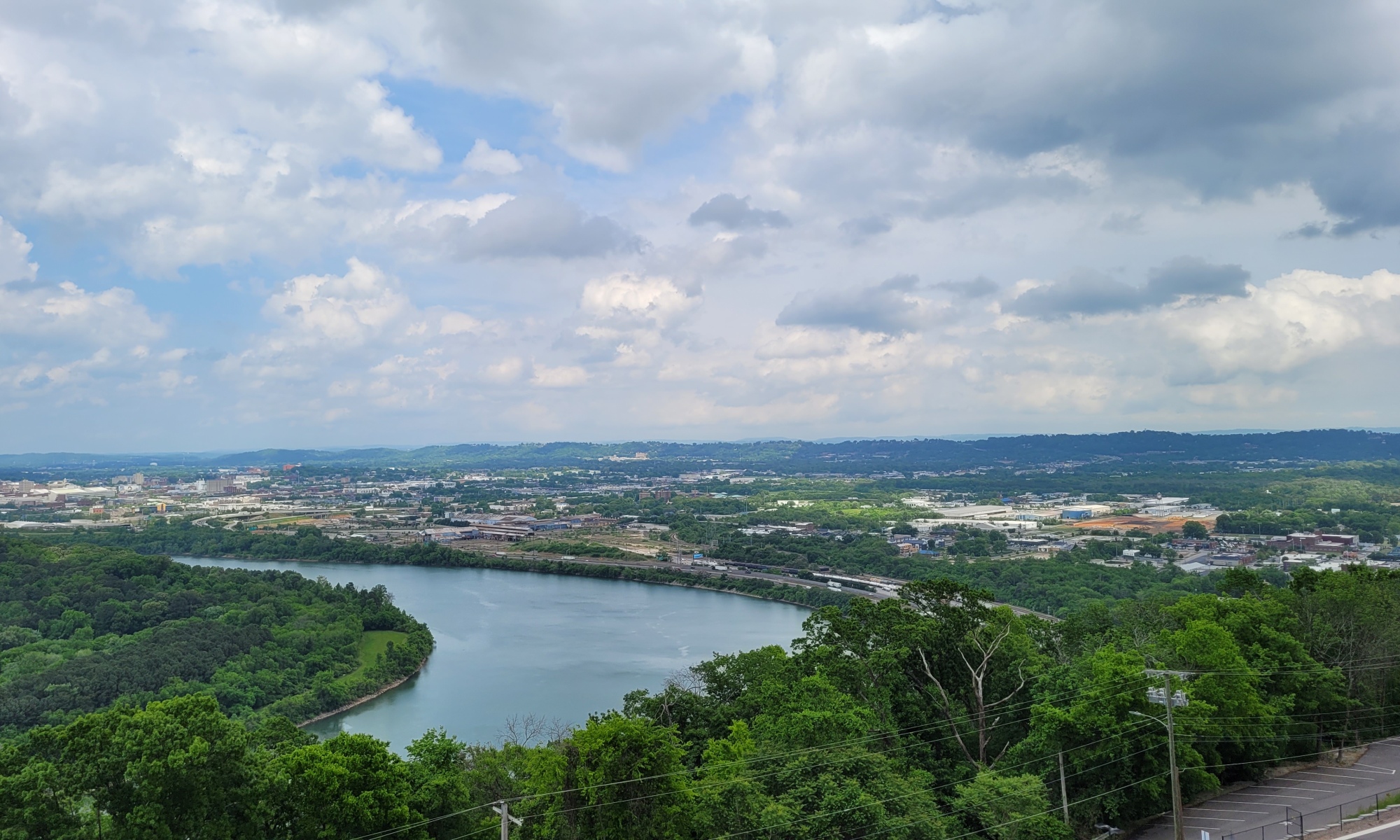 With folks waking up to gray skies and puddles on the ground, it did not look like a promising soaring day. These fears were confirmed right after the short pilot briefing, with heavy rain scattering pilots and crews to their vehicles, campers, and the clubhouse. I snuck past Tony Condon and Leah and ran into my car, bolting out of the airport. Instead, I hit the road, heading to Chatanooga to explore the area.

My first turnpoint was the Railroad Museum. Because Chatanooga is at the base of a mountain range and several major gaps, it served both as a major river and major railroad intersection, with both Union and Confederates desperately trying to conquer and hold this area during the Civil War. Unfortunately, upon arriving at the museum I discovered that it was closed. However, it was still possible to walk around the rail yard, with a sign that said walking here was “at your own risk” rather than forbidden. The towering black steam engines seemed content to quietly gaze off in the distance, seemingly introspecting on the many arduous experiences of hauling freight over the mountain passes in the Smokies and Alleghanies.

Next, I drove to central Chatanooga, specifically the art district near the Hunter Museum. This seems like the more Bohemian part of town, with some cafes, restaurants, and elegant houses. The Hunter Museum was a pleasant surprise, comprising of three distinct interconnected buildings representing three different architectural styles. The wings were more modernistic, with a central mansion that housed the initial collection of American art. The paintings ranged from late 18th century portraits, to Hudson Valley school romantic landscapes, to late 19th century impressionist style, and abstract/post-modern art. Most of the painters were unknown to me, though the galleries were very well curated.

Several pieces particularly stuck out to me. One was called “The wreck of Ole 97”, made by Thomas Benton, a painter that was Jackson Pollack’s mentor. The work’s elongated perspective served to attenuate the anticipated anxiety, excitement, and terrors of the upcoming derailment of the locomotive. The description was revealing in its parallels to Pollack’s work, which is generally too abstract for me.

Another wonderful work was “Metropolitan Triptych” by Yvonne Jacquette. This painting really stuck out with its black paper portraying the scene from an airplane descending into La Guardia Airport. Seeing this image revealed the dance of colors, lights, shapes, and forms of a city at night. I never thought of these things outside of the patterns that they are formed from and instead my mind drifted toward the notion that my family turning on their house lights at night are part of a canvas of color for someone in an airplane well above.

Finally, there was an absolutely remarkable photograph titled “Moonrise Hernandez New Mexico 1941” by Ansel Adams. The stark contrast in the black and white photo from 1941 revealed a hacienda, with emphasis on a stone white graveyard transposed in front of imposing mountains, a massive set of lenticular clouds, a darkened sky and a bright moon above. I found myself standing in front of this photograph for a while, inspecting all of its features and becoming very aware of my surroundings. The distant sounds of an occasional door opening, a person walking through a hallway. My leather jacket creaking as I turned, the reassuring thuds of my shoes over the hard floor. And then as I look back at the photograph, imaging the wind blowing across the desolate land, a cloud passing across that turns the cemetery from shade into bright sunlight, feeling the heat on the back of my head, mesmerized by the sheer momentous will of nature bearing down on me.

Thoroughly inspired, I left the museum for a short walk through Chatanooga. First, I went on the Walnut Street Bridge and enjoyed the beautiful view over the Tennessee River. Next, I walked back through the art district, stopping by a sculpture garden along the way. One notable sculpture was that of a person taking flight from the hill, hanging on to a set of wings. After a pleasant stroll in the pleasant afternoon sun, I drove up to Lookout Mountain to get a bird’s eye view of the city.

The city is nestled in a valley between Lookout Mountain and Missionary/Taylor Ridge. Bisecting the valley is the mighty Tennessee River, which proceeds to cut through Lookout Mountain to keep heading westbound. The river loops to and fro, with hairpin bends. The town fades away, with factory stacks, microwave towers, and powerlines revealing what an the industrial powerhouse Eastern Tennessee has become.

My final destination was the nearby Chicamauga Battlefield. Few people know of this battle, yet it was at the same level of ferocity and import as Gettysburg. The Union under General Rosecrans maneuvered to capture Chatanooga, catching the Confederate army completely by surprise. However, they succeeded in regrouping just south of the Tennessee border in Georgia and counterattacked an overly ambitious Union force. Due to miscommunication and mismanagement, the Confederates succeeded in dividing the Union force, causing their army to crumble on the second day of fighting and take flight in a desperate rout. However, thanks to a gallant stand by a smaller Union force, the remains of the Union army succeeded in retiring to Chatanooga and holding their position. What followed was a many month long siege, followed by a relieving army led by General Ulysses S. Grant. Subsequent to several battles in the mountains near Chatanooga, the Union secured Eastern Tennessee, deprived the Confederates of a critical strategic transportation hub, and created a base for future operations deep into the heartland of the south. It is thanks to the decisive battle at Chicamauga that Sherman was able to start his march to the sea and ultimately break the back of the southern war effort.

However, few people even know that this battle happened at all, and surprisingly the battlefield is not significantly listed as a Chatanooga highlight despite it being only 20 minutes away. I drove over to the visitor’s center, perused the exhibits and then drove around the battlefield. Along the way there were many monuments and plaques detailing the course of the battle. What stuck out was the dense foliage, tall pine trees, and occasional pastures and prairies. You couldn’t see more than 100 yards away and imaging the rebel charge with 10,000 soldiers pouring through an unexpected gap in the Union line one could see how even a seasoned general like Rosecrans to simply turn and flee. It was like the men became phantoms in this dark and foreboding forest.

Finally, I returned back to Chilhowee Airport in time for the dinner and safety briefing. For dinner, we had southern treats of chicken, mac and cheese, and cole slaw, all quickly and heartily devoured by the contestants. Next Mark Keene, our Contest Director rose up and took charge of the event through leading the safety briefing. Things emphasized were changes in the SSA to FAI scoring formulas, landing pattern, and staging considerations. We’re now ready to fly.

Afterwards, folks congregated for a wonderful evening of banter and fun. The McMasters and Hue taught me a game of Kubb, which we played until the sun went down. The young(er) folks all hung out in the campground, enjoying trading stories of exploits far and near.

On my way back to my truck, I saw the older folks listening to David Hart masterfully playing his guitar and singing tunes. I sat in for a while, especially enjoying his rendition of “The House of the Rising Sun”. And with that, I called it in, headed back to the hotel room for much needed sleep.

Today is yet another rain day and this time the rain was especially brutal. Heavy winds, thunder, and lighting greeted us at the pilot’s briefing. Everyone scattered once more, but now we are gearing up for some real soaring. I took the opportunity to get an oil change on the truck and take a trip up to Knoxville. With the heavy rain, I am mostly secluded to a coffee shop, writing up my thoughts, watching the weather forecast, my mind drifting toward flying once more. The forecast is finally turning a corner. Tomorrow promises a frontal passage, unstable air, and decent thermals. With the wet ground, it will also be a tricky day.

Thanks again to Aero Club Albatross for supporting me with the club LS-4 at this meet!